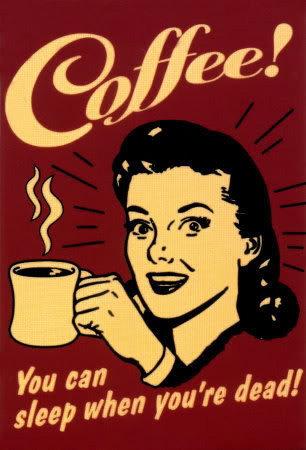 Are you like me and would rather drink a can of Red Bull before a cup of coffee any day? Well we may want to rethink our decision because apparently, coffee is good for us. Us energy drinkers know that for a short period of time, all of the sugar and chemicals in our favorite carbonated drinks will give us wings, but coffee will actually lower our risk of getting cancer (which can be caused by drinking too many energy drinks) and giving us a sharper memory.

The Cancer Epidemiology, Biomarkers and Prevention Journal reports that 39 percent of regular coffee drinkers have a decreased risk of getting head and neck cancer. Okay, what the hell is head cancer?

Their study also found that people who drink four or more cups of the black stuff a day have fewer cancers of the mouth and throat than us non coffee drinkers. First off, who the hell needs to drink that many cups of coffee in one day? Maybe you should just be in a coma for a while. And another thing, did the journal ever think that maybe these obsessive coffee drinkers have less cancer in the mouth because no one wants to make out with them because they have coffee breath? Didn’t think so.

Although scientists are unsure of which chemicals in coffee are actually good for our bodies, they do know that it’s great for our brain. Neuroscientists at the University of Lisbon showed that coffee can prevent the neural degeneration associated with brain disorders and aging. And drinking up to four cups of coffee a day over a period of time prevents the deterioration of the memory.

In a nutshell, coffee is good for our bodies. Scientists aren’t sure which ingredients help our immune system but if we energy drinkers want an improved memory, no neck, throat or head cancer then we should probably start adding a cup of coffee into our day…or 2..or 3..or 4.