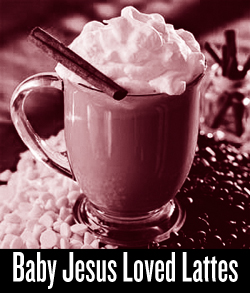 Getting you to believe in myths that generate revenue. Making lots of money in America.

Starbucks is in the business of making money and it has figured out a swell idea to get you to spend more money- by making you believe that it’s the holiday season already. Fixating on the idea that you are only a decent human being if you buy into the holiday cheer, they have decided that rather than having to physically wait for thanksgiving to come, the better thing to do is have you believe that it already has. And if Starbucks parades itself with lots of holiday cheer and pumpkin flavored trinkets, maybe you too will buy into the idea that it’s 2 o’ clock in the afternoon when in actuality it’s only 8am. But then again why should anyone be surprised? Myths and fairy tales are things that make the world go round. Starbucks just wants to make the whole world go faster.

Says the Consumerist (who inspired to writing of this story):

An unposted email from last year has a reader who found holiday-themed cups and music at Starbucks on the 4th. He asked the barista if she thought it was weird, and was told they had just rolled out the Christmas cheer that day.

Of course what did you want the barista to say- ‘my boss is mad and trying to pull on your emotional chords and extract as much money as possible because as much as we like you, we’ll like you more if we can get you to spend more money. Also, if I have to go crazy listening to Bing Crosby singing ‘Jingle Bells’ from now until the end of December, please don’t mind the occasional look of displeasure and disbelief coming from my face. So will that be two pumpkin lattes or 6?’

What gets even more interesting is what the Consumerist notices:  that the Christmas slam dunking sessions seem to be starting earlier every year. This year the hoopla out of Starbucks began Nov 3, the year before that the 4th, and the year before that Nov 8. Of course we’re already betting that Christmas is going to somehow go on until Jan 10 because we’re sure corporate America is going to come up with a wonderful post spin called – ‘Christmas Rehashed.’ And we know that will have you all jumping ‘cause who doesn’t like Xmas! (Except for the Grinch).