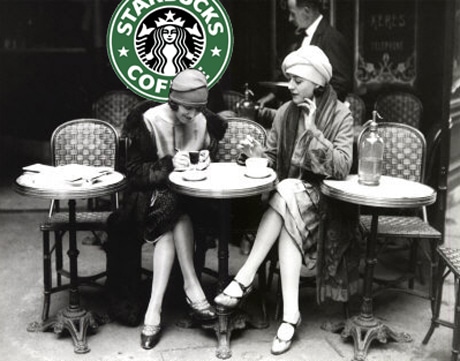 As Starbucks slips in the recessional tide, anti-corporate types seem to be cheering the chain’s decline. Finally, the independent coffee shop’s villain is paying for its multiple-outlet-per-block hubris, and the four-dollar latte has become an emblem of our so recently vanished delusions of wealth. But if Starbucks is the bad guy, who’s good?

First of all, Starbucks launched this whole coffee craze. Without Starbucks, coffee drinking as we know it wouldn’t exist in this country. North Beach had its cafes, but what about Marquette, Michigan? What about in airports and shopping malls and alongside highways for drive-thru cups to-go? Even Manhattan’s long coffee drinking tradition has shifted from diners and delis to the more uppity mold pioneered by the chain.

Especially now that McDonald’s and Dunkin Donuts are, in direct response to Starbucks, championing espresso drinks, can we expect to see cops lounging in squad cars while sipping lattes? Somebody needs to quiz them. What’s the preferred espresso drink of law enforcement in this country? Because of Starbucks, it’s time to reconsider our stereotypes.

Our newfound density of espresso friendly cafes includes independent coffee houses. Rather than put the independents out of business, Starbucks has helped the little guy flourish. The number of independent houses nationwide has increased as Starbucks has kept opening new branches, and independent shop owners have even gone as far as to choose locations based on their proximity to a Starbucks. Just like Macy’s or Target anchors a mall, Starbucks anchors coffee districts in cities across the country.

Aside from fortifying America’s continentalism, Starbucks is simply a decent corporate citizen. They’re well known for their generous health insurance policy and they’re the world’s largest buyer of fair-trade coffee beans. This is the kind of company we want serving as a cultural ambassador. When I walk by McDonald’s in Paris and smell that fry grease seeping through the walls, I hardly feel pride, but when I see native espresso drinkers opting for sixteen-ounce lattes, I feel strangely patriotic. I like our mammoth way of doing things. Isn’t espresso a little dainty? Wouldn’t you like something ten times bigger and with a tightly fitted lid so it will stay hot for as long as it takes you to drink it? Novel, eh? Imagine a whole world just like that!

Starbucks’ role in shaping America’s café culture was exactly the vision of its founder, Howard Schultz. He wanted to give the States a coffee scene like he experienced on a visit to Italy, and this sort of earnestness stuck with him even as his project became an international powerhouse. A leaked internal memo two years ago revealed a man distressed at the soullessness of his chain’s new branches. This corporate tycoon is anti-corporate at heart, and this contradiction, to me, should draw attention not to an inconsistency in the man himself, but to the weakness of the term “corporate” as a descriptor.

Just take a second to design your own independent coffeehouse in your head. Imagine. Be the god of your own coffee shop. What would you have? Exposed brick? Ragged couches to encourage loafing? Old board games? Zines? Used books to make things literary? Madeleines? Very dark chocolate? And the people. Who would come? Can you envisage them? I can. And I’ll just say right now, because I’m impatient, before I’ve delivered this argument completely, just so you can see where it’s going – it’s fifty times easier to predict who’s inside your local indie Joe Brew spot than any given Starbucks.

Shoes would be Converse or Vans or, if it’s fancy, the next step up, those dress shoes that you can wear everywhere, that look good with jeans. Because the pants are jeans, fitted tight around the ankles. Man faces are not clean-shaven. Rather, they’re bearded, or stubbled between thicker pastures of goatees and sideburns, but grown out somehow, the Mach 3 limited only to the neck, because the neck beard will always be ugly.

To me, the proliferation of independent coffee houses mirrors the plethora of cool sneakers now available. On any halfway hip urban street, there’s a shoe store with hundreds of different colorful sneakers, but I find it much more difficult to buy cool sneakers now than ever before. Before, you searched, you uncovered a secret somewhere, and you bought the shoes. Now, every store tries to sell you two hundred secrets, and the only cool shoes left are plain black Reeboks.

That’s how I feel going into an independent coffeehouse. They’re not exact replicas of each other, but the ingredients are the same, the aspiration is the same, and none of them seem original when lined up next to each other. To me this is even more infuriating than Starbucks branches being alike. At least Starbucks has the excuse of a central office in Seattle telling them what to do, but aren’t the independents supposed to be our vanguard? Don’t they guard something sacred? That independent spirit? But our independent spirit has nothing to show for itself. It’s resigned itself, voluntarily, to the same fate as its corporate brethren.

I went to Joe’s Coffee in the West Village the other day. This place is a popular shop for writers. Sure enough, inside, aside from one guy reading the paper and another reading Dostoevsky, everyone had either a Moleskin journal or a marked up manuscript or a laptop on which (I could tell by the rhythm of their clacking) they were typing fiction.

What I felt here was not the storm of creativity, but the solace of a shrouded aesthetic, like finally getting that Stussy shirt you wanted in fifth grade and standing as one with your friends clad in the same brand. It felt like instant validation, and as I sat there with my own manuscript, just like the rest of them, I felt tempted to think, “Ah, I am here. Now I am a real writer.”

But that validation isn’t authentic. That’s no true declaration. The authentic place is Starbucks. That feels so backwards to say. It’s the corporate coffeehouse that’s supposed to be detached, driven by numbers rather than human instincts. But for whatever reason, I think it’s the opposite in this case of coffee. At Starbucks, the people are there for a hot drink. There’re no pretensions. They are construction workers and soccer moms and gun owners and laid off bankers and tourists fumbling with coins they don’t know how to read and high school kids gossiping about their friends. There’s no false promise there. It’s just a cup of coffee. And what of that coffee? How good is the Starbucks brew? Well, I think the Pike’s Place Blend is friggin delicious.