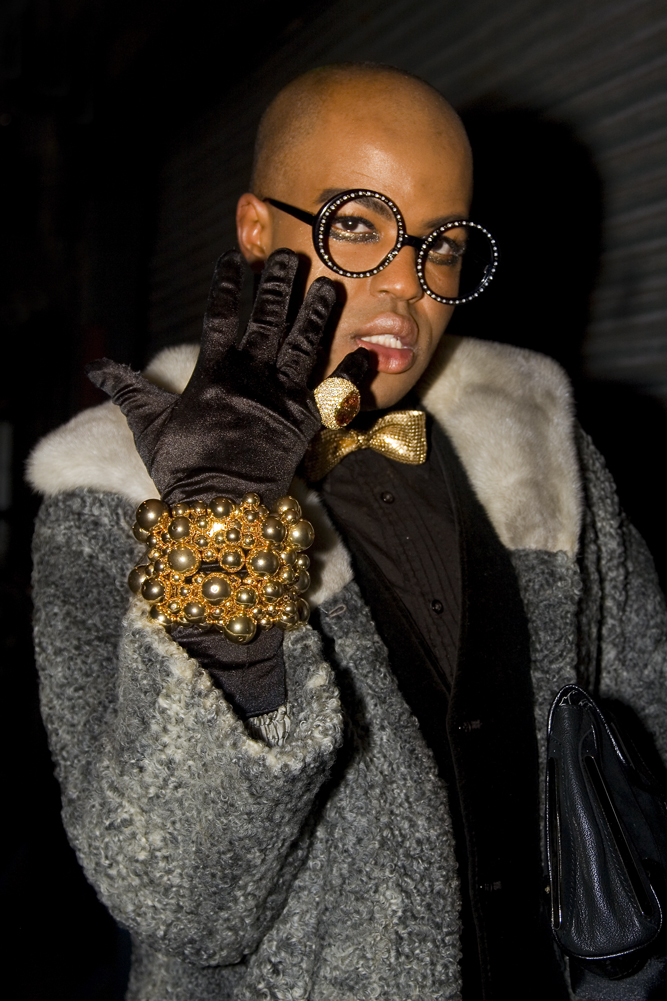 For all intensive purposes Malik So Chic is one of those eternal fixtures that one can never quite figure out how they got there but after a few martinis, a heavy batting of the eyelids one is willing to forgive his presence. In fact by the third martini and long woeful gaze you are probably besides your better will inclined to pick him up and gingerly pluck him on his cheek and whisper “I’ve never particularly liked social wanna be’s like you, but in your case I’m willing to look the other way.”

So it begins, nightclub fixture and self taught self impersonator Malik So Chic (Sick?) has now begun to finally enter the attention of the mainstream. A stow away from a meandering existence in Ohio, and the doting attention of lawyer father, this lad found the best pumps a girl could buy and decided that if there was any place in the world where he could finally be free and full of glee then downtown New York would be it. Known for nothing more than his outrageous dress sense, knowing the right sparkly people and making sure these last 4 years that he has been seen at all the right (whatever that words means) fetes, booze ups and desperate photo ops he is now destined (at least for this upcoming season) to enter the daily lexicon of what counts for presence and relevancy. Proving that in the gogo 2000’s talent and drive come second to vacuous behavior and a relentless drive to make it in front of the TV screen (this after all is how human beings like Jon Gosselin validate their existence), and that with enough lipstick, the right over sized sunglasses (gimmick) and a capacity to get themselves religiously noticed, photo shopped in society pages (like this one for instance) one can eventually fabricate an existence that is purely irrelevant but thoroughly entertaining.

Set to become the newest fixture to the mainstream and we guess the amused distraction of people who never noticed people like Malik So Chic before until paired up with uber socialite and pest Tinsley Mortimer (who if it wasn’t for her blond mane, dedicated campaign to be featured by every society rag and money bags would be a no show herself) the whole world can hardly brace itself. The dynamic friendly(bitchy) duo will soon be acting like fag bitches on the upcoming new reality show- High Society (yes- it has finally come to this, the disentegration of what passes for society and the greedy mauling of a time honored attitude for personal dividends…blah!) and forcing us to the very unpleasant conclusion, class and demeanor now come second to hysteria and histrionics.

All we can say is good luck Malik, we’ve watched you crawl a long way to get here, and in fact we were there many times to help you wipe away all those pebble bruises, but my dear if this is what you want- to be a celebrity prima donna we are so very happy for you, if not somehow offended and confused by the stupidity of it all (but really- you do deserve an A+ for persistent groveling and flapping your eyelids like a sex starved Japanese school girl). In any respect now that you’re a ‘star’ yourself (gulp) will we still be able to get drink tickets out of your little paws or will we have to wait behind a star struck public?

Anyway, Malik, you finally did it. You pulled off the greatest hat trick and con show the world has ever seen and we are so bloody thrilled for you. Can we have your photograph (again)? But first one more martini, oh dear it was only yesterday when girlfriend was eyeing us out of his corner booth at defunct Bungalow 8…?

A Night out with Kenny Kenny and Susan Bartsch. What’s a Girl To Do?

Time is but just a Wonderful Memory… a Night out on the Town. Ennagon Gallery, Ago and Bungalow 8.