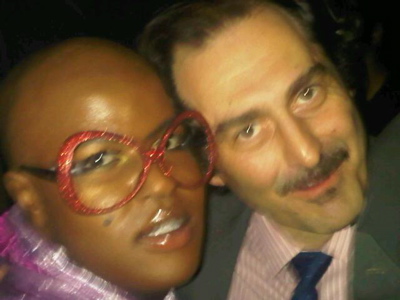 Even before we arrived the horrible press was circulating, he said this, and she said “I’m definitely not coming and I know nothing about nothing.” The he I am referring to is enfant terrible Paul Johnson Calderon and the she I am referring to is High Society’s Devorah Rose. All one could do was mildly groan and forgive oneself for having the audacious idea of bringing together 3 of CW’s ‘High Society’ stars and expect it to pan out. Obviously I was being delusional. If they couldn’t get on the set, how were they ever going to get on in a nightclub?

Having said, there was one young man, okay, let’s be fair to him, there was one diva, High Society’s Malik So Chic who stared at life and said “Oh my god, can I come and be pretty. Just promise to pay me taxi and I’ll love you.” And that is exactly what happened. He came and between us and 2000 (is that an ambitious number? no – let’s say 3000 damn it- blah!!) people we danced, misbehaved (that’s our secret), had people stare and talk at us (I know don’t you hate it?), point cameras and microphones at us, and carry on like distressed school boys too in love with their own image.

At some point some woman began to talk  to me about fame and stars and I listened to her as intently as I could before realizing she was some supermodel of sorts who was only saying what she was saying because she thought she was hot. At some point I gently nodded my head, before returning to my table for more alcohol before politely declining her invitation to resume our conversation.

Malik on the other hand, must have thought he was still on stage because he was checking his make up and man handling his tiara and dancing with all his groupie fans which admittedly brought a big smile to our faces. This all continued for hours and at some point my date left without me, but at this stage of the game I have come to accept such travesties and eventually I turned and looked for Alon Jibli our mutual host and planted him a sloppy kiss. Thank you kids at Tuesday Baby Tuesday– so hot!

It was to be sure a delicious evening and I hope next time I invite Paul Johnson Calderon and Devorah Rose to join such said festivities they will gladly accept instead of ruefully arguing and publicly threatening to burn each other up.

The High Society Spoof that never lets up.