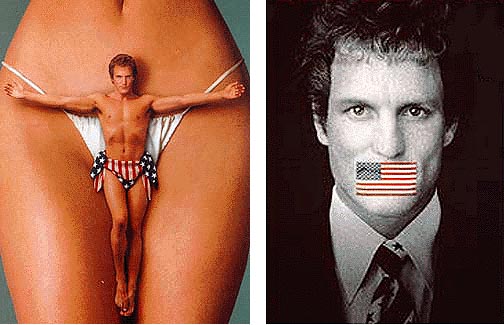 Editor’s note; Although the events took place in June, July of 2009, we still feel the themes are relevant and rampant, and it was only when this editor was channel surfing one evening did he notice a homogenous persuasion to the content he was seeing on TV. They might as well have been banned you from existing if you didn’t fit a particular marketing study’s quota or what ‘proper’ society (whatever that means…) deems as valid and proper for your ears. Who knows maybe some things need to be censored, but when we do it, what are we really censoring and why? The thoughtful, amazing and hilarious essay below will have you wondering. In the meantime you can go about day dreaming about the Oscars and all that jazz, but just remember even that is a form of censorship, after all, having a group of people deliberate in a secret room what passes as muster for your preferred reading or viewing pleasure is a subjective one at best. That said, we look forward to more movies depicting rape, warfare, except for the part where young children are swallowed by other human beings. We have to draw a line some where, no…?– Scallywag.

That’s right!  We must, at all costs, keep cannibalism out of our public schools and away from the impressionable young minds of our high schools’ upperclassmen—and the occasional sophomore or two.  Apparently, that’s how a concerned group of parents feels in Nashua, NH, where four stories (Ernest Hemingway’s “Hills Like White Elephants”, David Sedaris’ “I Like Guys”, Stephen King’s “Survivor Type”, and Laura Lippman’s “The Crack Cocaine Diet”) have been banned from Campbell High School’s AP English curriculum.  These stories allegedly exposed students to “content that touched on cannibalism, cocaine use, abortion and homosexuality,” according to the Nashua Telegraph.

As many of you probably know; cannibalism, cocaine use, abortion, and homosexuality have become rampant and are currently ravaging our nation’s youth.  These scourges are literally tearing our country apart.  If we don’t band together and do something about it soon, which thankfully the school board and a group of concerned parents finally did at Campbell High School, we will have a full-fledged epidemic of hopped-up, cannibalistic baby killers on the loose! And the worst part of it is—they’ll all be gay. That’s right, gay. Think about that.  That’s just what we need in this country, for some impressionable youths to read a story or two about eating people and then go out and actually eat people! They might even try to hit two birds with one stone and just eat a baby instead of a regular, full-sized person.  I’m scared to imagine what would happen if these poor, misguided children got even more ambitious.  Clearly, this is all snowballing out of control.  We need to ban these four stories before it’s too late and America falls apart.  It’s all clear to me now.