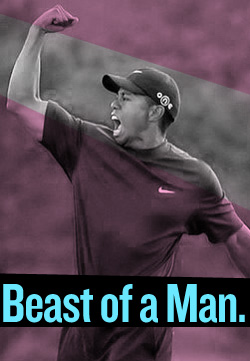 If 2007 was the year of the Britney Spears meltdown, and 2008 was the year of celebrity divorces (Paul McCartney and Heather Mills, Madonna and Guy Ritchie, etc), then 2009 is the year of the Tiger. The scandalous revelations have not stopped from day one of Woods’ car crash. Along with the news that he was beat up by his wife over an alleged affair, the mistresses began their yapping, and now it is being reported that Woods had not one, not two, but ten mistresses — (is his wife blind? Or just plain stupid?or even participating…?). They have all decided to remain tight-lipped — yeah, ok, let’s just wait until the tabloids pay them the big bucks.

According to Fox News, the alleged mistresses of Tiger Woods are:

1.) Rachel Uchitel. The club hostess was the first of the women to be linked to Woods after the National Enquirer reported that she traveled to Australia to be with Woods during a golf tournament there. So far, she has denied the affair.

2.) Jamie Grubbs. The 24-year-old reality show contestant and cocktail waitress claims she carried on a 31-month-long affair with Woods until his crash last month. She offered a Woods voicemail to prove it.

3.) Kalika Moquin. The 27-year-old club manager from Las Vegas is reported to have had a brief sexual relationship with Woods. She would neither confirm nor deny the report.

4.) Cori Rist. The 31-year-old swimsuit model reportedly met Woods at a Manhattan club last year before they began a sexual relationship that led to Woods flying her out to various secret locations for hook-ups, and her introducing the golfer to her 7-year-old son.

5.) Jamie Jungers. The 26-year-old, who sold her story to a British newspaper, is a former employee of Trashy Girls Lingerie. She said she met Woods in Las Vegas.

6.) Mindy Lawton. The 33-year-old pancake house waitress from Orlando claims she was dumped by Woods in 2007. According to the Post, it was her affair with Woods that was caught on camera by the National Enquirer, when he was snapped dropping her off at her trailer park. The threatening news later led to a Woods Men’s Fitness cover in exchange for the magazine’s silence about the alleged affair, the New York Post reports.

8.) Unidentified Alleged Mistress No. 8. A former cocktail waitress from Orlando, Fla. does want to reveal her identity yet, according to her attorney Michael O’Quinn. But this she has said: at the time the affair allegedly began, she was 20 years old and met Woods at the Roxy in Orlando, where she was a VIP server.

9.) Unidentified Alleged Mistress No. 9 is reported to be a “sexy” British TV presenter who was single at the time, but is now married.

10.) Unidentified Alleged Mistress No. 10. is reported in a UK paper to be a “sex-addicted cougar”

As if this already isn’t enough to make us gag — Perez Hilton says that his sources exclusively revealed that one of those ten women have contacted Playgirl in order to sell them pictures of Woods’ genitalia — (haven’t enough people seen his penis?) Continuous coverage will let us know the truth behind all these reports, but until then, let’s see how high the count of women will go.