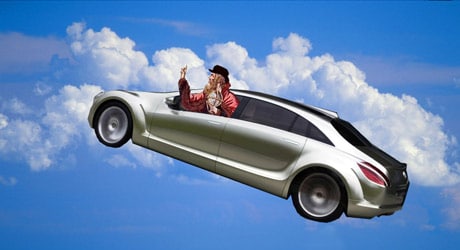 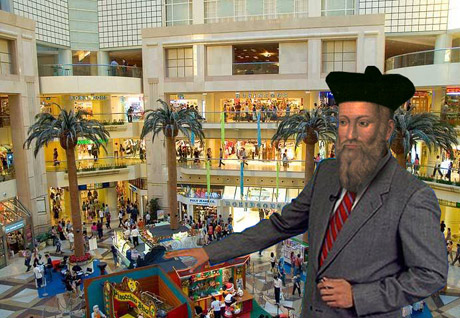 Nostradamus predicted that in the year 2010 Fashion Island will become one of the most predominately ‘chic’ shopping centers in all of America. It will become bigger, better, brighter and more decadent than any other shopping center south of Dubai with it’s very own giant fluorescent rollercoaster in the middle. After this prediction it is also predicted that no one will pay attention to rollercoaster’s ever again because that will be the moment when everyone will have their own hundred thousand dollar Mercedes Speed Machine. Speeding from store to store, velvet rope abodes and their own televised reality shows. ‘More,’and ‘shiny’ will forever be the new catch words. More clothes, more food, more glitter, more gossip and of course your own useless roller coaster…

He prophesized that old ladies with state of the art face lifts will be dragging thousands of shopping bags in their dead brittle hands on golden marble floors all the way to the morgue. They will be buried with all of their treasures. The house, the car, the little dog named ‘Fou fou’ and the golden treasure collected over many wonderful dedicated hours on new hybrid shopping networks hosted by people like Perez Hilton and Jon Gosselin.

In the future everyone will make nine figure incomes while doing everything to prevent from getting old. The slogan for Fashion Island will be you live here, you shop here, you ‘star’ here, you die here. There will be more magazines dedicated to your legacy, more fashion editors concerned about your outwardly appearance and at some point of your life it will be more than likely you were once a supermodel or at least would have dated one.

The local hipsters will be so bored with their lifestyle they will make up games like find the car that costs less than fifty thousand dollars. Upon finding the car you are awarded one point. The most points wins! You get extra points if you find a car that is beat up. But what you win we will never know.

A local boy will win the whole contest by finding a 1984 Mercedes in the lime green color, which is said to have a Kelly blue book value of 1,200 dollars. He will receive a honorary meeting with the editors of the NY Post and a romp with the celebrity du jour, someone like ‘Lilo’ for instance. If on the other hand should a girl win the contest she will be afforded a lifetime’s free consultation of her celebrity plastic surgeon of choice.

It is also predicted that trophy wives will be put on pedestals and will never be allowed to come down from them ever again. Trophy wives will be married to sixty-five year old bank accounts posing as old men. They will have a black American express card attached to them like a utility belt and will forever be on a low carb, high protein diet.

No one will make their own decisions. A committee will be hired and much delegation will take place and then the choice to have a glass of water will be made. That said there will always be ample bottle service and it will be preferred that children start drinking champagne at an earlier age so as to acclimate themselves with their burgeoning social lives once they hit twelve.

Spray on tans will be sprayed on everything that has skin. Even the children will be born with that spray on tan look. Hipsters, euro trash and Upper East side dames will of course have their own designer sun spray lotions and each hundredth spray can you will buy will be personally signed by Perez Hilton.

Fashion Island will be the part of California that splits off and falls into the sea. There will be an uptown Fashion island and even a downtown Fashion island, where you end up living will of course be decided on your looks and an honorary fashion police committee. A predilection to speaking with a French accent and excessive name dropping will see you living in the west wing of Fashion Island- other wise known as the Jersey Shore.

No other predictions have been able to be made. Nostradamus was last seen walking the ‘Bryant Park’ planks before driving a Mercedes speed machine into the sky and never been seen again, albeit with their very own designer tan spray… 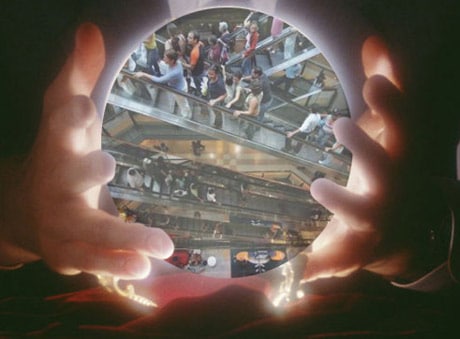