A Kentucky Walmart outlet has been accused of racism after a viral video appeared to show security tags placed on only darker shades of makeup at a retail outlet.

The video, allegedly taken at an unspecified store, was posted to TikTok on Sunday and had amassed over 900,000 views as of Monday, while also being shared on other platforms like Twitter. The accusation of racism comes less than a year after the company announced that it would stop allowing stores to exclusively lock up beauty products made for people of color after being accused of racism.

‘I’m at my local Walmart and I’m just looking at the makeup section and I noticed this,’ TikTok user @alynicoletta says in the video. ‘I’m looking at the concealers and they are all normal, but then once you get down to the darker shades, they have little security tags all over them. But they don’t for the lighter colors. So, Walmart, tell me that you’re racist without actually saying that you’re racist.’

A Walmart spokesperson said in a statement to Newsweek that the incident was being looked into on Monday evening, while noting that security policies may differ between individual stores.

‘We do not tolerate discrimination of any kind at Walmart,’ the spokesperson said. ‘We serve millions of customers weekly, crossing all demographics, and are focused on meeting their needs while providing the best shopping experience at each store.’

Standard corporate response: ‘we have policies and training in place’

‘Like other retailers, we have policies and training in place that allow individual stores to add additional security for items such as electronics, automotive products, cosmetics and other personal care products to ensure they are available for sale to our customers,’ they continued. ‘In this case, we are following up with the store to ensure those policies were followed properly.’

The episode isn’t the first time, Walmart has been accused of bias. In June, 2020, a report stated some products made for people of color were locked inside a case in some stores, while similar products for White people were hanging free, according to WRCBTV.

In an announcement at the time, Walmart said it will stop storing multicultural haircare and beauty products in security cases, but noted most of its stores never did it in the first place.

And then there were these responses on social media below that piqued this author’s attention. See what you think? 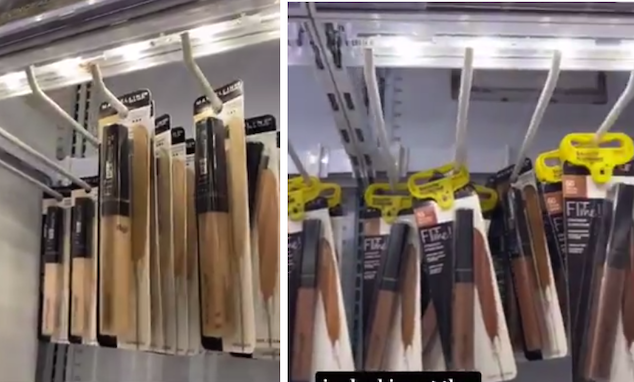 ‘I’d genuinely be curious to know the rate of shrinkage on darker vs lighter makeup. Security tags cost money and LP doesn’t do this for their health. It’s not racist if it’s stolen more frequently, but that would be inconvenient to the everything is racist crowd.’

‘This argument is totally *invalid* considering there is plenty of data on what is “most stolen” in stores, the top three being meat, razors and baby formula… but uh, that stuff is NOT locked up. trying to pin “preventing shrinkage” to this argument… simply does not work.’

‘Does that make it racist or did they just identify the product that is ACTUALLY most frequently stolen and tag it?’

‘I’ll believe this when I see the statistics on stolen cosmetic products from that Walmart, until then I will staunchly believe that there is racism behind this decision.’