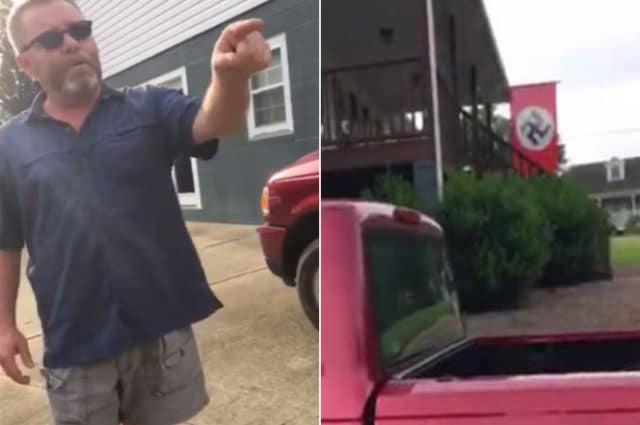 Joe Love swastika flag lover: A North Carolina man is outed on Facebook for flying a Nazi swastika flag. But doesn’t a hate monger have the right to hate too?

Joe Love a Mount Holly, North Carolina man has become the new focal point of tensions between the alt right movement and the left wing identity cruisers, after being confronted for flying a Nazi flag outside of his home.

Asked why he chose to fly the ‘offensive’ symbolic flag, Love responded, ‘This is Nazi fxcking America.’

The newest outing comes after local woman, Page Braswell took it upon herself to drive up to Love’s home after spotting the swastika flag in front of the man’s residence on Sunday.

The ‘meeting’ led to the expletive laden episode being posted on Facebook where it has since gone viral.

In the video, Love tells the woman, ‘Take your queer ass on, your lesbian a— on… and go off, b—,’ after she tells him that she flies a rainbow flag in support of the LGBT community when asked ‘what type of flag she flies.’

The ‘meeting’ led to Braswell posting her ‘interlude’ on Facebook with the caveat, ‘We need to ALL stand against Nazis’.

Of note, the Braswell went one extra step further, posting Love’s address and place of work.

Wrote the woman, ‘Let’s run this Nazi out of town. For real.’

Which is to wonder, would Braswell take pleasure if the world woke up the following morning to find out Joe Love had suddenly been gunned down on his front doorstep?

Come Monday, Joe Love (yes the oxymoron is to die for…) told the Gaston Gazette he was still intent on flying the Nazi symbol, which whether one likes it or not, Love has the right to do, while insisting, he ‘doesn’t hate anybody,’ and he’s ‘not trying to wipe out no race.’ (or is he?)

Which begs the question, does the act of displaying an overt symbol of hate, suppression, racism beget an attempt to violate others who may not share in such ideas? Or is it only when one physically takes such action that the line is crossed? Which is to ask out aloud, should anyone be repudiated for their ideas and how they choose to live and believe in regardless how base and violent those ideas may be?

Talking to the Gazette, Love justified the flag (and he needed have to if he didn’t want to, in the same way you and I flying a rainbow flag ought not justify that choice) saying the swastika used to be a religious symbol in India before being ‘corrupted by Hitler’. (which technically is true).

A claim that one might suspect isn’t entirely true in the case of Joe loving swastika Love.

Love goes on to say he put up the Nazi flag after others had gotten stolen.

‘I put three different flags out here, which were all Confederate flags, every one of them got stolen,’ he said. ‘I put this one up, nobody wants it.’

Love said he plans on swapping the Nazi flag back for a Confederate one as long as it’ll ‘make the world a better place.’

Which begets the question, to what degree does idolizing a symbol of hate and suppression make the world a better place, save for perhaps give some semblance of panacea of a burgeoning white male class displaced in the economic class brinkmanship as the new world order continues its unapologetic ascent ….