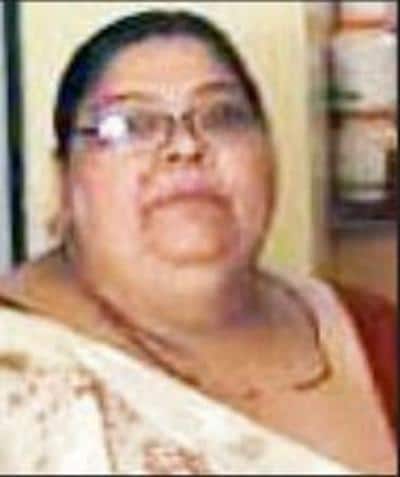 How Manjula Vithlani a devoted wife and mother inadvertently ended up killing both herself and her husband in a freak accident.

An Indian woman, Manjula Vithlani, 68 has inadvertently killed her husband after falling down a stairwell and crushing him to death under her 20 stone weight.

The couple’s deaths, the result of cerebral haemorrhage came after the wife slipped while making her way up the family stairs as she sought to help her son who had developed a breathing problem in the early hours of the morning.

At the time, Manjula Vithlani’s husband, Natvarial was following his 128 kg wife up the stairs only to suffer serious head injuries when Manjula slipped and landed on him. The wife also died as a result of sustaining similar head injuries.

The incident according to a report via the Times of India occurred in South West Nagpur along the section of well to do Kalavad Road.

The report tells of the couple’s son, Ashish living on the first floor with his wife, Nisha, with the son’s parents having lived on the ground floor.

At the time both parents had sought to climb the stairs leading to the son’s apartment after concern for his well being after Nisha had come rushing down the stairs circa 4am to get some medicine for her husband.

Told a Rajkot Taluka police station official: ‘Her in-laws also woke up and hurriedly tried to go upstairs to check his health.

‘However, Manjula could not keep her balance and slipped. She fell on Natvarlal who was climbing behind her.

‘They were rushed to a private hospital where both died of cerebral haemorrhage.’

Ironically, the husband and wife’s daughter in law in a bid to assist her in laws also slipped on the floor, leading to her being admitted to hospital with injuries to her leg.

‘On getting to know that he had taken ill, they tried to reach the first floor in too much hurry.’