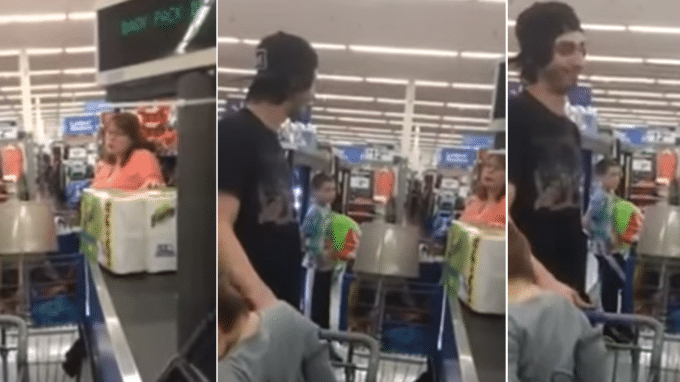 Woman confronts man using Food Stamps Walmart: Debate ensues as a woman publicly shames a man using food stamps to pay for groceries. But how well conceived were her arguments?

Taking America by a storm is the visage of a foul mouthed ‘toilet paper woman’ ( you’ll understand in a minute) who took to disparaging a man at a Walmart store while using his food stamp card (aka EBT card) at a check out cashier.

The eye grabbing back and forth which came, caught on video (since removed) begins with the woman, who was in line behind the man and his family, complaining about funding his groceries with her tax money.

Yes some people don’t hold back. But let’s find out, did she have good reasoning to let it rip? Or was she misguided as most are when it comes to lambasting those on social welfare? And if so why? We’ll get to that yummy part soon.

Goes the transcript: ‘You know, I put in 50-60-hour weeks … I’m trying to provide for my family,’ the man says after being remonstrated.

The woman proceeds to argue while a child sits in the man’s shopping cart.

‘You’re not providing for it, I am!’ she yells. ‘The government is!’

The dad then suggests she complain to local lawmakers.

‘Vote Republican — I’m sorry, I don’t know what to tell you,’ he says.

Not letting up, the woman assures the man she’s not ‘a bleeding heart f***ing liberal,‘ with the dad, right there in front of the kids telling the woman to ‘shut the f*** up.’

I told you this was going to be yummy.

From there the unidentified woman insists that Democrats ‘give it to you so that you vote that way — I’m not stupid.’

The video ends with the dad telling the woman to mind her own business, saying, ‘Well until you vote Republican and get them out of there, deal with it, b***h.’

Replies the woman: ‘No you don’t — you just take advantage of them like everybody else,’

Nicholas Jackson tries to buy $60K BMW with food stamps before stealing it.

When did employment become a ticket to #foodstamps and housing assistance? Shouldn’t it be a ticket out of #poverty? pic.twitter.com/w2M5JTtTlG

What perhaps makes the whole captured incident particularly absurd is that the cashier servicing the man was herself most likely on food stamps, that despite having a full time job.

Incidentally a 2013 Wall Street Journal report found that nearly $1 out of every $5 in food stamp money is spent at Walmart.

Notes a report via deathandtaxesmagazine: The perception that being on SNAP benefits is some fun free ride for the lazy is not backed up by reality. The vast majority of people who use SNAP are employed or have recently become unemployed due to unforeseen circumstances. 83 percent of households on SNAP include children, elderly, or disabled individuals. SNAP is not a drain on taxpayers — in fact, every dollar of spent through SNAP generates $1.73 in economic activity. SNAP benefits actually create jobs, 3,300 farm jobs for every billion spent through the program. Half of all adults in the country will receive SNAP benefits at some point between the ages of 20 and 65.

And for those of you curious to get a sense of where the real welfare gets to be distributed there’s this chart below, via commondreams.org, which might surprise many, except anyone who knows to shut the mainstream media off and do a bit of research where they’ll come to discover that in modern day America, it’s the capitalists at the top of the heap who are getting all the socialist help that so many find offensive to begin with.

Socialism for the rich & austerity for society

Cause using the state to subordinate one’s power, riches and protect and further their agenda is like milk to a baby, never mind what so many have come to believe, give or take those in society who will always abuse the system, but a snail’s pace compared to the rabid corporate elite and oligarch who’ve got their own major abetted racket going on, with some very loyal bought fans ever waiting to assist in their rise.

And then there were these random comments on the web that made me wonder, what do you think?

However, Charity must be voluntary. When the government forcibly takes your money and gives it to someone else, no matter how deserving, its theft. There is no coercion in charity. The government needs to get out of the “charity” business. We’ve spent trillions on the war on poverty, and the amount of “poor” hasn’t gone down.