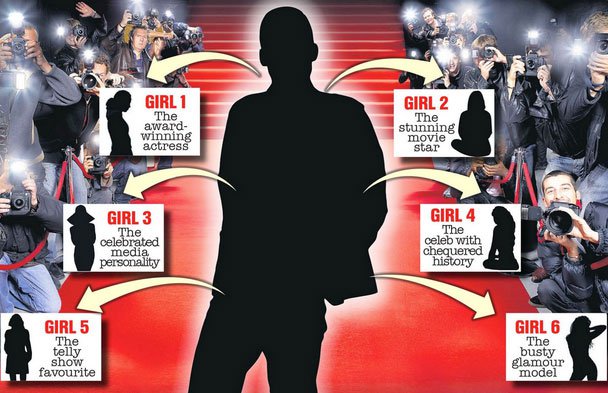 Making the media rounds is the tale of the misbehavior of a high profile mystery ‘womanizing’ Hollywood actor with HIV who has purportedly been urged to publicly out their identity after keeping their illness a secret and possibly endangering hundreds of unsuspecting love interests.

The story comes courtesy of radaronline who first reported on the mystery Hollywood actor’s ‘desperate battle with AIDS.‘ The report maintains the middle aged playboy actor’s reticence of publicly identifying his identity for fear of ‘fans’ hating him and the implicit suggestion that those living with the disease continue to be stigmatized.

Explains a frenzied report from the UK’s Sun in part, with a ‘string of high profile ex-lovers’ whose HIV diagnosis has left Hollywood ‘gripped with fear’.

Adds the report: His lawyers are believed to be aware of the situation and preparing for a raft of potential legal claims from previous lovers.

The actor’s list of exes includes an award-winning actress, a religious movie star, a top Hollywood personality with a controversial past, a TV star, a media personality and a glamour model.

The journal laments the mystery Hollywood actor’s fear of being stigmatized and  potentially opening themselves up to costly legal action from ex-partners accusing the actor of recklessly putting their health at risk. Action that the middle aged actor is accused of having kept up despite first being made aware of their illness two years ago.

A report via radar explains the actor has yet to understand how they contracted the virus, while admitting to previously engaging in tattooing, injecting drugs and having sex with prostitutes — all activities that increase the risk of contracting the virus.

To boot a source explains that the mystery star perceived themselves to be ‘indestructible’ (cause they believed their own myth, the myth of Hollywood status, confused vast dollar signs for immortality or simple foolishness?) despite indulging in high-risk sex practices.

Conceded a mystery source: ‘He led a dangerous lifestyle,’

In the interim, social media users continue guessing the mystery identity of said mystery actor with reports ‘that many women are reportedly rushing to have HIV tests done to set their minds at rest.’

One rumor making the rounds has it that the mystery actor has been paying a former lover $20,000 a month to keep his secret, after she found HIV medicine in a bathroom cabinet in his home. The women allegedly took photos of the medicine and threatened to go public.

Despite providing discernible existential woe regarding the actor’s dilemma, the tabloids in the know (are they really in the know?) refuse to name the identity of the actor, leading to the public to guess who the mystery actor is and most likely overlook the fickle nature of Hollywood to begin with and it’s nature of churning and burning.

In the interim, the UK’s mirror has stooped to a new low asking punters whether they feel sorry for the mystery Hollywood actor with AIDS while at the same time insisting the mystery actor deserves everything coming his way. Indeed, so much for the media getting it all wrong and adding to the stigma of AIDS and denunciation of all that it normally champions in the first place; ‘spunk, sex, drugs, money and chutzpah …’

This is a very poor show from the Mirror. https://t.co/m0bWzwLXnN pic.twitter.com/NgMyrkMRHv

this is so unpleasant. there are no facts here, just conjecture and gossip and bile. https://t.co/GklmBwiGST

@TheSun We have already confirmed that the Hollywood actor with HIV is Charlie Sheen. No word yet on whether he has AIDS.