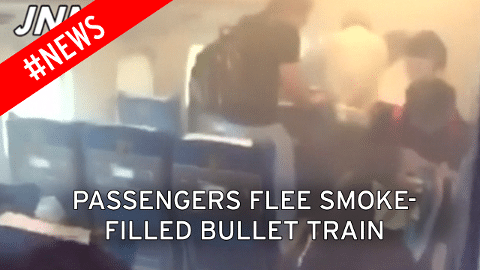 A 71 year old Japanese business man riding a high speed bullet train who deliberately set himself on fire in an act of deliberate self immolation has died along with a female by standing passenger. It is thought the woman died of smoke inhalation.

Also injured in the ‘deliberate act’ were 26 passengers, three seriously, which reportedly took place on a Shinkansen train about 50 miles outside of Tokyo.

Most of the injuries sustained were as a result of smoke inhalation.

According to a report via the nytimes the chaos began when a male passenger began splashing lighter fluid on himself and around the train car.

Told a witness: “I heard screams, and someone was shouting, ‘There’s a man spreading kerosene!’ ”

‘And fire spread all over the place immediately.’

Offered another witness, Takeo Inariyama, a 54-year-old businessman traveling in the second car: ‘I said to myself, ‘This is bad!’

‘I saw everyone running toward me and smoke coming. Also the smell (of smoke) filled the car. So I felt my life was in danger.’

As the man set about putting himself on fire, panic stricken passengers turned to flee the car, whilst others begged the man to stop as a fire began to rage in the train car.

Urged one passenger: ‘There are children on board!’”

Witnesses said that the man had appeared disoriented and had taken to wandering up and down the aisle of the lead car before abruptly beginning to empty a large plastic jug of liquid around the cabin.

A woman who said she was riding in that car told Japan’s national public broadcaster, NHK, that the man had inexplicably placed several 1,000 yen notes, worth about $8 each, on her tray table, saying: ‘I found some money. Take it.’

Authorities have yet to understand what motivated the man, whom they believe hadn’t set out to intentionally harm others, as he told one passenger, ‘You’re in danger. Get out of here,‘ shortly before lighting himself on fire. 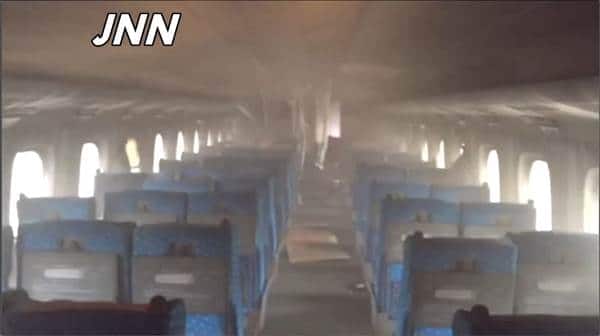 Crew personnel would eventually manage to subdue the fire and evacuating passengers, but by then the carnage had been done.

The 16-car bullet train, called the Shinkansen in Japanese, travels the 553 kilometers between Tokyo and Osaka in 2 hours and 33 minutes.

At present it is not understood why the man had sought to deliberately burn himself to death, why he had chosen to perform his ‘public death’ on the train and whether he had been a regular passenger on the bullet train which he decided Tuesday morning to kill himself on.

At present it is not necessarily understood how the man managed to bring the hazardous liquid on the train, which is illegal to carry on trains.

A 71-year-old man has died after setting himself on fire aboard a Japanese bullet train. http://t.co/W41aeLaU9d pic.twitter.com/7gxl5nz6UD