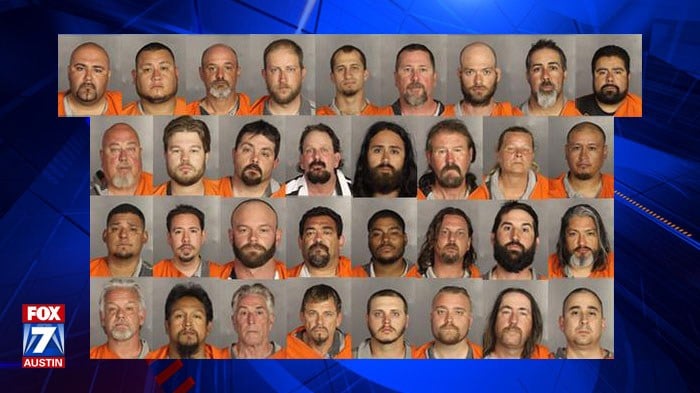 Brought in front of a judge, each suspect was charged with engaging in organized crime in connection to a capital murder case, with most ordered held on $1million bond.

Sheriff Parnell McNamara offered press statement each of the suspects is being booked at McLennan County Jail, but that some might be moved to other facilities due to the sheer amount of arrests.

Involved in the mayhem were 5 biker gangs whose deadly brawling and shooting left to 9 members dead and 18 seriously injured.

Caught up in the fracas were the Cossacks, the Scimitars and the Bandidos Motorcycle Club.

Also involved were the Los Pirados, the Veterans, and the Leathernecks.

Of the 9 gang members killed who had come to settle simmering differences in preceding weeks, authorities said they were either Banditos or Cossacks Motorcycle club members.

The Bandidos Motorcycle Club was named by Texan authorities as one of the four most influential gangs in the state alongside the Pagans, Hell’s Angels, and Outlaws. Members have been convicted of smuggling drugs across the U.S.-Mexican border – an area they are said to specialize in.

What started as a physical fight in the bathroom at the Twin Peaks Bar and Grill around 12:15pm spilled out into the bar and rapidly escalated to involve chains, clubs, knives and gunfire on a quiet strip.

Employees and restaurant goers alike were forced to scramble, with many taking shelter in the freezer as hundreds of gang members ran rampage around the booths, according to KXXV.

In the parking lot, a SWAT team shot dead at least one biker and surrounded the rest. When the shooting ended, bodies were scattered across the tarmac and cars were riddled with bullet holes.

Told Waco police Sgt W Patrick Swanton: ‘In 34 years of law enforcement, this is the worst crime scene, the most violent crime scene that I have been involved in,’

He also turned on the restaurant, Twin Peaks, for failing to let officers in to monitor the situation.

‘If you have a police department asking for your assistance as a business, you ought to pay attention to that,’

‘If you don’t bad things can happen, as evidenced here today.’

On Monday it emerged that Twin Peaks company has revoked the franchise agreement for the Waco restaurant.

‘We will not tolerate the actions of this relatively new franchisee and are revoking their franchise immediately,‘ the company said.

The company, which has 13 restaurants in Texas, blamed the restaurant’s managers who ‘chose to ignore the warnings and advice from both the police and our company, and did not uphold the high security standards we have in place to ensure everyone is safe at our restaurants’.

Here is a list of those arrested, from the McLennan County Sheriffs Office (note this list may not include all those who have been charged):