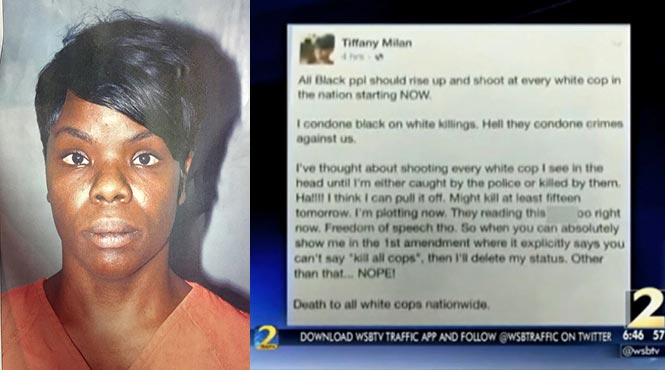 Georgia woman Ebony Monique Dickens has been charged with making terroristic threats after she called for ‘deaths to all white cops nationwide’ on Facebook.

The 33 year old mother and holder of a masters degree in legal services posted her rant under the alias Tiffany Milan on Monday in reaction to the Baltimore riots in lieu of the death of Freddie Gray in police custody.

Arrested Tuesday evening the woman would be charged with dissemination of information related to terroristic threats.

A house visit to the woman’s home would lead to Georgia law enforcement officers confiscating a loaded gun and three computers from Dickens’ residence.

Read the woman’s post: ‘All Black ppl should rise up and shoot at every white cop in the nation starting NOW.’

‘I condone black on white killings. Hell they condone crimes against us.’

‘I’ve thought about shooting every white cop I see in the head until I’m either caught by the police or killed by them. Ha!!!! I think I can pull it off. Might kill at least fifteen tomorrow.

‘I’m plotting now. They reading this sh** too right now. Freedom of speech tho. So when you can absolutely show me the 1st amendment where it explicitly says you can’t say “kill all cops,” then I’ll delete my status. Other than that…NOPE!’

‘Death to all white cops nationwide.’

Offered East Point Police Lieutentant Cliff Chandler who told he felt to take the woman’s threats seriously: ‘That’s 15 people that she’s talking about killing within a day or so, so whether she is serious or not that’s something that we have to take seriously.’

Adding: ‘If you’re feeling this thought and have access to a firearm, potentially you could decide to execute threats that you’re speaking of.’

In court Wednesday, City Solicitor Antavious Weemes said Dickens should have known better since she had a criminology degree.

In Dickens’ defense, public defender Tracey Moran told the court: ‘My client was simply venting… it was a horrible mistake. The chance of her doing this again is highly improbable.’

Nevertheless Dicken’s online rant: ‘show me the 1st amendment where it explicitly says you can’t say ‘kill all cops,’ then I’ll delete my status,‘ did not sit well with the Judge.

She disagreed saying that the first amendment to the Constitution does not give you the right to threaten and terrorize others.

A $10,000 bond was set and Dickens was banned from all social media.

Dickens will appear before a judge on Thursday at Fulton County Jail, where she is being held.

The woman’s case has since sparked a legal debate between First Amendment rights to free speech and words used on social media that could be used to incite violence.

Mirroring similar cases, including an instance of a Pennsylvania man Anthony Elonis threatening his wife on facebook, the presupposing onus may come down to if those targeted actually felt threatened. A decision from the Supreme court in that case is due in June. 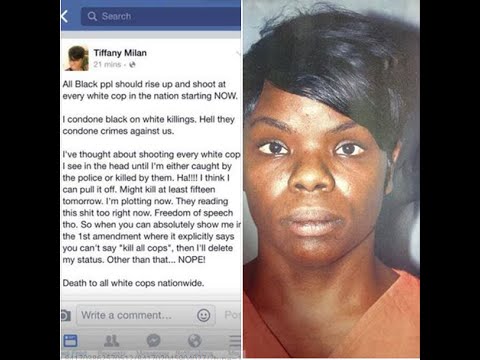