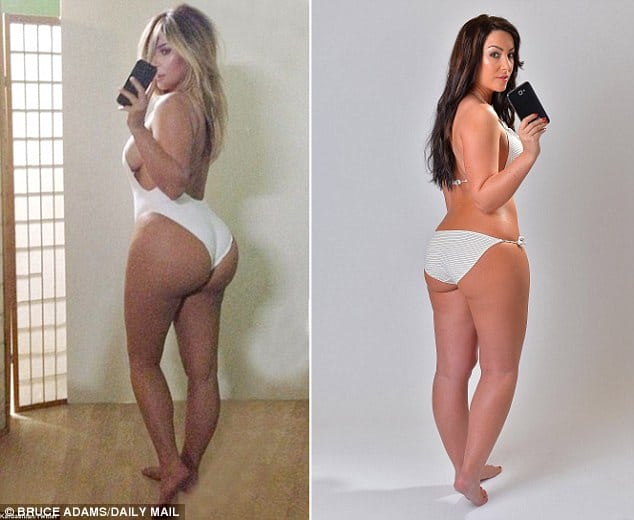 Jo’Anne Patton is very thankful indeed….While Kim Kardashian might be laughing all the way to the bank and how with her rigorous endorsements running amok and in no end in sight, one UK woman is also it seems making some financial headway as a consequence of bearing an uncanny resemblance to the omnipresent media whore.

Welcome Jo’Anne Patton of Leeds who at the age of 32 has found herself enjoying a steady stream of endorsements in her native UK, where the woman is said to be making close to £36,000 ($54 000 USD) over the course of the year for just six appearances per month.

Via a report via the UK’s dailymail (who it seems have taken an extraordinary measures to endorse the Kardashian clan in the recent year) we come to meet Patton who currently works in PA (but for how much longer?).

Offers the Kim Kardashian look alike: ‘For some events, for example a teenager having a Sweet Sixteen or another birthday party, then people pay well into the hundreds for a Kim Kardashian appearance because she is their idol.’

‘She’s very popular in that age group because she’s such a good role model,’

‘At the moment I have a full time job and do the Kim Kardashian stuff as a side hobby, but now because there’s the appetite out there for her, it’s something I’d really like to do full time and create a business out of it.’

Which raises the question is there enough appetite for a Kim look alike and what if the market should suddenly wane? Or which is to wonder what if people suddenly come to their senses? Or what if Jo’Anne Patton simply buys a one way ticket here to the United States where Kimbo mania is de rigeur? 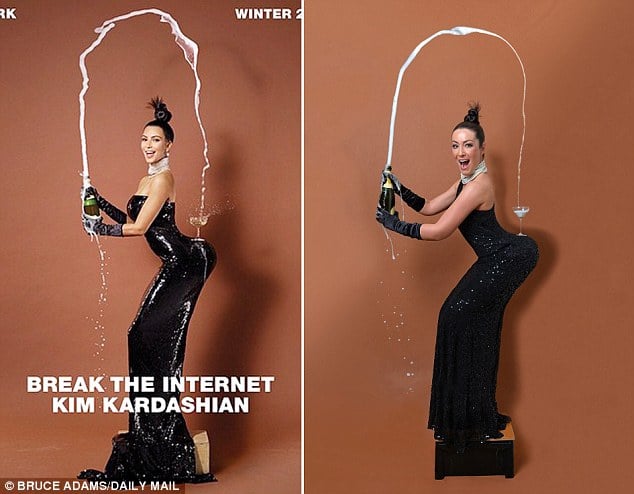 That said the English being English and with an appetite for common sense (one again wonders?), some have come to criticize Jo’Anne’s part time pursuit, with others wondering if the PA worker is necessarily a suitable ‘role model’?

Reflected the aspiring Kim Kardashian can I make easy money too look alike: ‘‘Kim Kardashian has done really well for herself and has her fingers in a lot of pies [and] I am flattered that some people think I look like her.

‘Her profile has become bigger and bigger – not just her bum – and she has been extremely clever in how she’s marketed herself.’

The PA assistant admits having being bullied over her looks whilst growing up and reckons being told she looks like Kim Kardashian has helped with her confidence levels.

Reiterated the woman: ‘I was more insecure when I was growing up and I was bullied at school’

‘I had acne, I wasn’t in with any of the cool crowd.. So it’s flattering if a few years later you put on some make-up and people tell you that you look like Kim Kardashian when you go out.’

Writes the dailymail: The PA admits that keeping up with Kim’s appearance is no mean feat, and with costs of over £1,300 per month, the look doesn’t come cheap.

Despite having breast implants 14 years ago, Miss Patton has had no other cosmetic surgery and says she would not like her bottom to be any bigger.

She credits her 27-inch waist and 40-inch buttocks to ‘a lot of Nandos together with squats and weights in the gym’, and added that: ‘It’s also important to me that Kim Kardashian is curvy, and is not a skinny role model.’

Since joining a look alike agency based in Leeds and London, Jo’Anne describes her role as having to ‘perform’ their character at private parties, conferences, gala dinners and theme nights, as well as mingle with the crowd and have their photograph taken.

Offers Jo’Anne: ‘My first booking was a private birthday party and I was really nervous’,

‘I wore a tight cream and black body-con Lipsy dress, because Kim likes those dresses, and did my hair and make-up as best I could.

‘Luckily, the host and all her friends love Kim Kardashian so in the end it was great, as I just smiled and had my picture taken with everyone.’

What do you think? Is Jo’Anne on to a good thing? Or should she just concentrate on being her true self, perhaps that might score her a better living and a better state of mind down the road…?