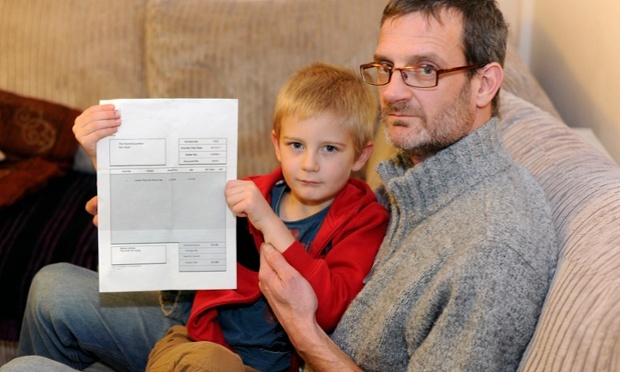 Talk about taking things to extremes….A 5 year old’s parents have been invoiced to the tune of  £15.95 ($24.11 USD) after their son failed to show up to a schoolmate’s birthday party and since threatened with legal action if they do not pay.

Reports the UK’s guardian: Derek Nash and Tanya Walsh found a brown envelope with a £15.95 “no show fee” left in their son Alex’s schoolbag last week, sent by his classmate’s mother Julie Lawrence.

Lawrence claims that Alex’s failure to attend her child’s birthday party has left her out of pocket, and that his parents had her details to tell her that their son would not be attending.

Nash said he had been told he would be taken to small claims court for refusing to pay.

Hmm what to think what to wonder? Surely there’s more than meets the eye?

The hubris  all started when the parent’s 5 year old son received an invitation to the school mate’s birthday party just before Christmas at the Plymouth Ski Slope and Snowboard Centre.

At the time Alex – who attends a local nursery in Torpoint, Cornwall – told his parents he wanted to go, so naturally Alex’s parents confirmed he would be at the party.

But life would soon intervene and Alex’s parents would later realize on the day that Alex had been double-booked to spend time with his grandparents.

Moral conflict ensuing. Whether to make doting grandparents happy, pack off instead to the kids birthday party or wonder if one can possibly be at two places at once. Such moral turpitude for a 5 year old boy. Welcome to the real world dear Alex. We’ve sent you the invoice in a brown envelope… 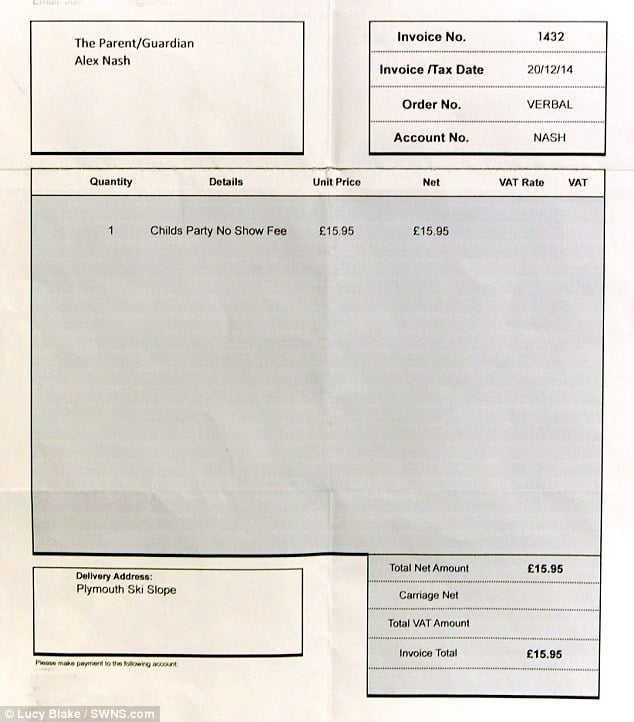 Told Alex’s mother  by way of Apex News: ‘Julie Lawrence and I weren’t friends, we didn’t talk to each other at school, but I felt bad about Alex not going to the party.’

‘I searched for the party invite afterwards and I’m not sure we even had one.’

Adding: ‘But to be invoiced like this is so over the top – I’ve never heard of anything like it. It’s a terrible way of handling it – it’s very condescending.’

Nash has since told he did not have the contact details of Julie Lawrence, and so could not let her know on the day.

After he found the letter he visited Lawrence, as her address was on the invoice, and ‘told her I would not be paying her the money.’

And how did that go?

Reiterated the father: ‘It was a proper invoice with full official details and even her bank details on it.’

Adding: ‘I can understand that she’s upset about losing money. The money isn’t the issue, it’s the way she went about trying to get the money from me.’

And where does Julie Lawrence stand : ‘All details were on the party invite. They had every detail needed to contact me.’

What do you think? Has Julie Lawrence taken things a bit too far? Or should Alex’s parents just pay the invoice and wipe her forever off their rolodex?

And here’s what social media thought:

Just IMAGINE how fun the parties of a woman prepared to invoice your 5yo for failing to attend on would be.

You know what I’m with Mrs Lawrence. She probably fired off that invoice in anger — and her anger is surely understandable. She’d paid for a party for X number of kids and one fails to show with only the flimsiest of excuses with the parents saying that their kid was double-booked had decided he wanted to see his grandparents instead (why give him the choice – surely it would be easier to reschedule the grandparents?). As other people point out the parents didn’t exactly bust a gut trying to let them know so another child could take the place.

Having seen more detail elsewhere Tanya Walsh’s attitude also seems a bit dubious – in fact she’s a bit like Zippy when he’s busy insisting he’s done nothing wrong. The fact that they’ve also run to the media, waving their child in front of the cameras is also a bit distasteful too.

So now poor Mrs L is getting criticised all over Twitter with all the bile that entails – and lets not forget that she was the wronged party.

I sincerely hope this does not mean that kids will decline after being invited to a birthday party for my daughter because they are afraid of being sued if they have a last minute change of plan. My children’s birthdays are joyful events and they look forward to them the whole year. To make it about money is petty. I fully expect those kind of changes and really don’t mind even if they have texted me to say they are coming. This year my daughters best friend said she was coming and did not make it because her mum had to take a neighbour who had been assaulted by her husband to hospital. Would this mother have sued someone like that? 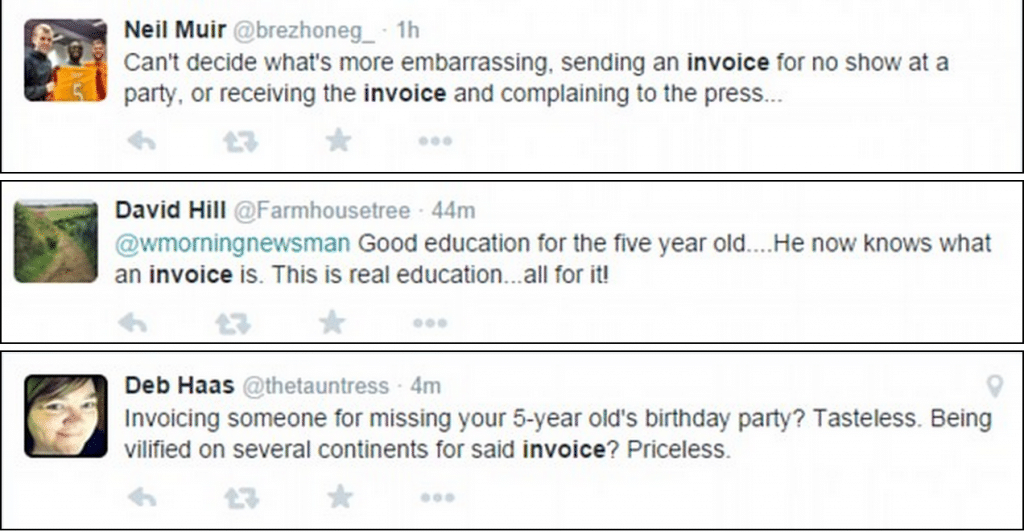