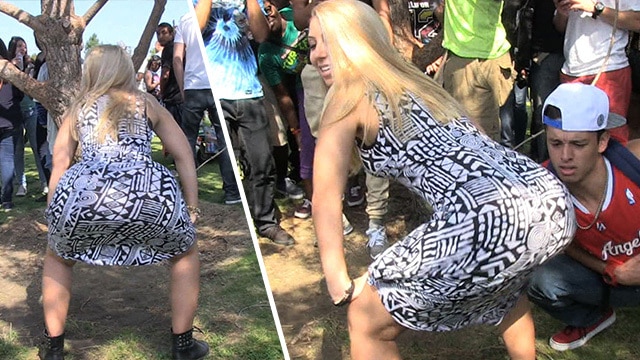 Jessica Vanessa a former teacher aide has told how taking to full time twerking has since led to the 22 year old earning well into six figures.

According to the Florida based woman she has been able to harness key sponsorship along with her Vine online videos which have since grown to a strong 2 million following.

Reflected the professional twerker who told by way of the UK’s dailymail it was a no brainer to fully immerse herself in her new role: ‘What I make in six seconds would take me  four months to make as a teaching assistant.

‘It’s definitely a blessing. I bought a new car, paid it off in full and I was able to get out of debt from the school that I graduated from.’

Jessica says that she has her loyal fans to thank for her sudden turn of fortune.

‘It’s quite simple really, the more followers you get, the more advertisers want to pay you for mentioning their products – and I’ve got lots.’

In choosing to come up with captivating entertainment (you think?) Jessica mixes comedy sketches with twerking videos to keep her legions of fans entertained – and it was when she saw the popularity of her short videos growing that she finally decided to give up her previous occupation.

Reiterated Jessica: ‘Quitting my job was definitely a risk because I knew once I quit there was no turning back. Either I make money doing these videos or I’m going to be broke and jobless.’

Although Jessica appears to be brimming with confidence she admits she was once quite shy and hated dancing in front of others.

‘When I was younger I was very shy and I didn’t like dancing in front of anybody.

‘Then I kind of fell in with a different crowd and got more confident. By the time I hit high school I was definitely a party girl.’

Despite living what appears a dream life (re define the American dream…) the professional twerker does acknowledge that she has found some aspects of her fame difficult to cope with.

Offers Jessica: ‘I do get plenty of rude and mean comments. I’ve even had two breakdowns over them – where I have literally locked myself in my room and considered taking down all of my social media accounts.

Jessica says that the nature of her dancing attracts a lot of misconceptions and causes people to make assumptions about her.

‘People like to define you as a whore for twerking but it’s just a type of dance, that’s it, if people were open-minded they would understand that.’

But Jessica has found strength from the support of her family who have overcome their own prejudices about twerking.

‘I would have no problem showing my grandmother my twerking videos – she is wild and crazy and would probably want to join in with me.’

Making a success has also involved getting her pawn broker father to support her who admittedly was cool to the idea when she gave up her day job to pursue full time twerking.

Offered Rafael De Leon, 46, ‘As a parent I still see her as my little girl, I don’t see her as an adult. She could be forty years old and she’ll still be my baby.

‘It just keeps expanding more and more, no matter what she does I’ll just keep supporting her 100 per cent – I love everything she does.’

Jessica adds that she feels as though she is finally doing what she was born to do.

‘I always enjoyed doing random crazy stuff so when I got a day job it was not something I enjoyed doing. Now I look at Vine as an outlet to many different opportunities which I enjoy doing now.’