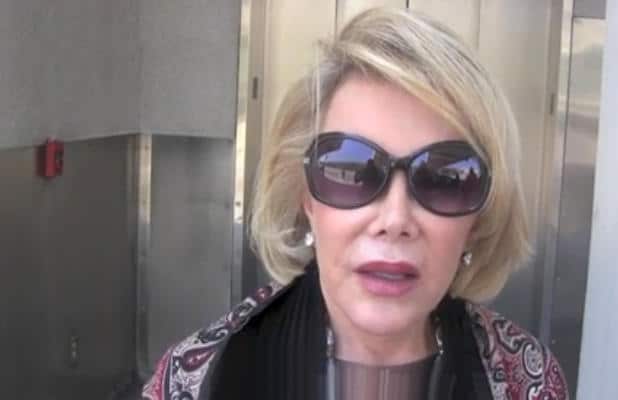 She may be a comedienne by trade but Joan Rivers left little to laugh about when she made comments regarding the crises in Gaza where over the last 40 days close to 2000 Palestinian civilians have been murdered at the hands of questionable Israeli militia. A situation tacitly abetted by the United States who to date has resisted to bring the Israeli government (who it funds) into line and bring the two groups to discussions.

Irrespective of one’s personal take on the crises, it seems a degree of decorum and regard might be in the offing given the huge losses of late and the ongoing stalemate of a situation that has yet to find a peaceful resolution. That though it seems is not in the vocabulary of outspoken public figure, Joan Rivers who spared little to the imagination yesterday after being asked outside of Los Angeles airport yesterday what her thoughts were regarding the Gaza crises.

From there, Joan Rivers proceeded to attack the Palestinian people for voting for Hamas in democratic elections.

‘You can’t get rid of Hamas, You have to say you do not recognise them, they are terrorists.

‘They were re-elected by a lot of stupid people who don’t even own a pencil.’

Stupid people who can’t even afford a pencil? How about a toilet bowl to take a piss in Joan?

Of course there are many who would argue that Israel or the US is a terrorist state too, but that hasn’t stopped its citizens from voting the political apparatus into power either. Yet then again these perhaps its best to recognize that these are difficult questions to raise, given that so much is at stake and if history is a strong indicator of moral and imperialist conduct, taking what you can from other nations is sometimes the path of least resistance.

When questioned further about the civilian victims, Joan Rivers added: ‘You were told to get out, you don’t get out, then you know you’re an idiot, and at least the ones that were killed were the ones with very low IQs.’

Our collective hero’s latest remarks come as the public figure has taken to insinuating that anyone critical of Israel’s military assault on Palestine is stupid and dumb, as well. The list of such celebs, not all of whom Rivers has specifically called out, includes Rihanna, Mark Ruffalo, Russell Brand, Javier Bardem and Penelope Cruz.

Who knows, maybe these mostly innocent defenseless people driven to the brink are really just ordinary people like you and me just trying to get on with life, find love, happiness and moments of joy in dire circumstances…

Realizing she probably made a public relations spectacle of herself, as the video soon began to make the rounds (yes kids this is how tabloid editors pay for their mansions) our collective hero rushed to release a statement on Facebook, in which she made it clear she stood behind her words, but that shit had been taken out of context.

‘I am both saddened and disappointed that my statement about the tragedy of civilian casualties was totally taken out of context,’ she said.

‘What I said and stand behind is, war is hell and unfortunately civilians are victims of political conflicts.

‘Along with every other sane person in this world, I am praying for peace. ‘ 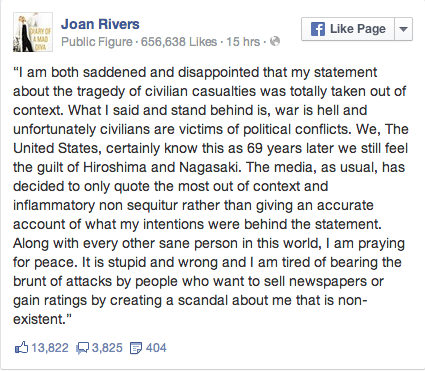 In recent months, Rivers’ trademark barbed insults have offended many: She referred to First Lady Michelle Obama as a “tranny,” joked about Lindsay Lohan’s miscarriage and attacked half the women in Hollywood in her recently-published book.

Whether we agree that the Palestinians or the Israelis are at fault, one wonders if a modicum of sensitive regard for those caught in the cross hairs of the struggle might be a plausible option? As a private citizen, Joan Rivers is surely entitled to her views but as a public figure perhaps the comedienne ought to be held to a higher standard and the argument that one does not go about espousing notions that humiliate and denigrate others, regardless of one’s political beliefs.

Was Joan right to be politically in-correct? Perhaps that’s the only way she is able to curry any relevancy (and pay day) these days….?

As of Thursday, 1,888 people, including 446 children, have died and 9,804 injured in Gaza in the past month, according to the Palestinian Ministry of Health.

The United Nations has estimated that at least 70 per cent of the dead were civilians.

This morning, Israeli military resumed strikes on targets ‘across Gaza’ in response to rocket fire from the territory that was aimed at Israel. And the madness continues…