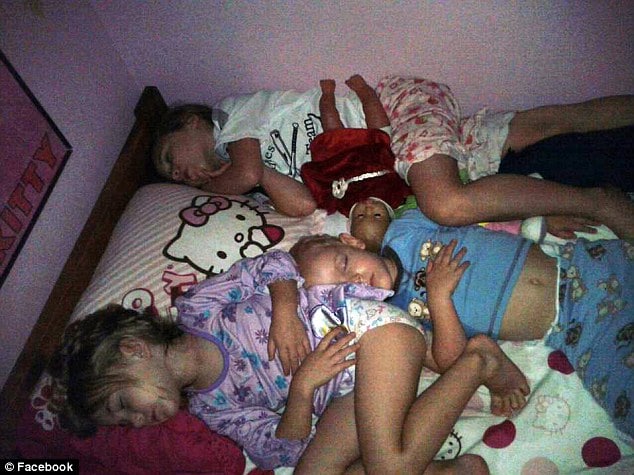 Thomas Stay, the grandfather of the 4 Stay children murdered yesterday execution style at the mercy of Ron Lee Haskell, 33 has today told that the gunman had sought to impart carnage on his son Stephen Stay, his wife, Katie and their children because he ‘envied their perfect lives.’

Formerly married to Melannie, the sister of Katie Stay after a bitter divorce, the shooter bore a grudge against the family, unable to accept the fact that his wife had divorced him, disillusioned with the type of life the Stay family led as opposed to the one he could offer his former wife.

Thomas also opened up about Haskell’s history, telling the UK’s dailymail in an exclusive that Ron Lee Haskell had been ‘unstable for a long time’ – but had been known to his family for years.

‘The whole thing doesn’t make any sense. Ron was just all mixed up.

‘He and Melanie split about six months ago, they were living in Logan, Utah, and he was abusive, very controlling. Their divorce was finalized in February.

‘She couldn’t take it any more.’

Thomas said that his son and daughter-in-law moved to Texas about four years ago having previously lived in Utah.

Like Haskell they had four children, but unlike him their marriage lasted.

He said: ‘Melissa had the kids with her. I don’t know if he was thinking maybe they will be at Stephen’s house.’

Which raises the notion had Haskell come with the intention of looking to impart harm on his own children?

Stephen’s mother Joyce Stay, 74, would add: ‘We lost our son, our daughter-in-law, our four grandkids. We know the man that did it.

‘His family has been friends with ours for years. He was not well person. I watched this kid grow up, I have had him in my home for sleepovers.

‘This is a good family that this man comes from – there is something wrong in him to do this kind of thing, it’s not normal’.

Court records reveal that Karla Haskell claims on July 3, her son got angry at her for talking to his ex-wife and duct taped her to a chair, with her arms taped as well.

According to ABC 13 the domestic violence report claims Haskell accused her son of choking her until she lost consciousness and that she stayed taped to the chair for four hours.

Indeed, according to court records, Haskell once had a restraining order filed against him by his ex-wife and had been considered a threat to their children, court records reveal.

According to NBC News, Melannie Haskell petitioned a court for an order of protection in July 2013. The judge granted this order, and Melannie Haskell filed for divorce the following month.

In October last year, the protective order was lifted when the couple decided on a mutual restraining order and custody arrangements involving their children.

Before she filed her restraining orders, Utah law enforcement told that Haskell had been arrested several times by the Logan City Police Department and was jailed for a time in the Cache County jail in 2008 on charges of simple assault and child abuse or neglect.

A sensibility and preponderence to violence that would eventually come to erupt after Haskell’s disillusion with his life as opposed to the perfect life others close to hand were allowed to live, except for him. Until that is Ron Lee Haskell made sure that came crashing down too…