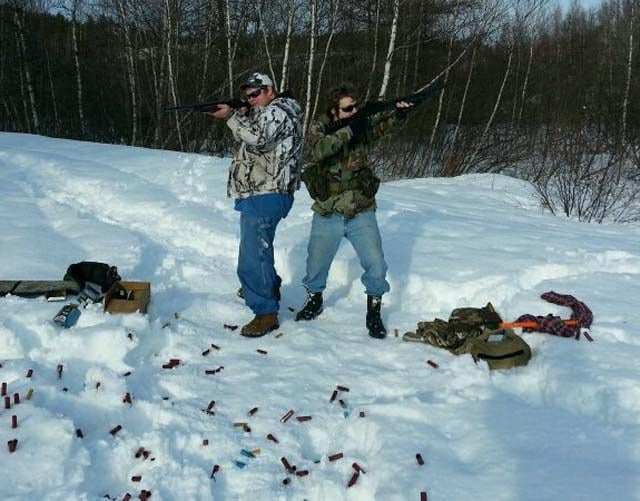 In trying to understand the psychological make up of Moncton, New Brunswick shooter, Justin Bourque it has been established that in the weeks before he had taken to arms last night he had been heavily disillusioned and had even gone so far as to quit his job at Walmart.

Events that alarmed friends, including one childhood friend Mike Campbell who Bourque had come to visit recently.

The friends had gathered and were ‘just sitting in the garage drinking a little bit of whisky, listening to some Black Sabbath and having a good time,’ recalls Campbell.

Yet although the two were still close, Campbell admits the pair had drifted apart since Bourque’s parents decided Campbell was ‘too competitive’ at street hockey, he said, adding that Bourque was home schooled throughout his childhood.

But it’s what happened next which unnerved Campbell in retrospect.

‘He got up. ‘I should get home before I pass out,’ is what he said. ‘I’m going to go,’’ Campbell recalled of their last meeting in the garage, just down the street from Bourque’s family home.

And he was like, ‘That probably won’t be able to happen….’ I was kind of weirded out by it.”

Asked what he’d say to Bourque if he had the chance, Campbell said: ‘I’d tell him he’s a f—— idiot. You have problems? Everybody has problems. You don’t take peoples’ lives. Whatever you have going on in your life, there’s ways to solve it. It’s not right. It’s messed up. I don’t feel bad for him but his family is the best people I’ve ever known. I just watched the 15 cop cars surrounding his parents’ house, fully automatic weapons drawn, and all his sisters coming out with their hands on their heads. So sad. I can’t believe what they’re going through.’

According to Campbell, Bourque had recently quit his job at a grocery store and was living in a trailer park.

‘I believe he just didn’t know what to do. He was my best friend my whole life. He would be the last person I would think would do this.’

A former co-worker at Walmart, Caitlin Isaac would tell Business Insider that Bourque has long been resentful of authority and fascinated with guns, prone to making unsettling statements.

‘I never took him seriously, but he always said he wanted to go out with a bang and bring people with him,’ told the Walmart employee who worked with Bourque several years ago, until he was fired for “attitude issues.” He wanted to “give people something to remember him for.”

Where and what Justin Bourque may have done for gainful employment upon being fired has yet to be established, nevertheless choosing to quit in recent weeks and continue living at a trailer park may have said volumes about the man’s state of mind, his disillusionment with what he perceived to an unjust society and the hostility that would come to bear against authority figures and the establishment.

A cursory regard of his Facebook page also portend to clues that as recently as May 5, Justin Bourques had aspired to wreak havoc when he took to posting the following post: