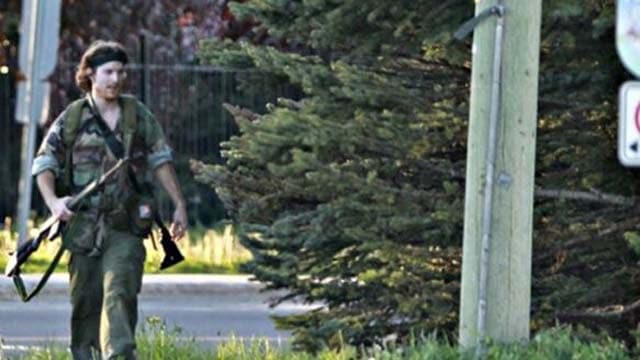 Justin Bourque the Moncton, New Brunswick man who caused havoc after killing three RCMP officers and injuring two others early this morning, circa 12.10 am surrendered to authorities after announcing he had enough.

Prior to the man’s arrest, authorities had essentially locked down the city as they proceeded to undertake a manhunt for Bourque who was still heavily armed after managing to escape the clutches of authorities and having been spotted on at least three different occasions yesterday morning.

The attack in the town of the normally tranquil town of Moncton would go to be the most deadliest attack the town had seen in over a decade.

Arrested in the front yard of Michelle Thibodeau‘s home, the home owner would come to hear the assailant tell to surrounding officers, ‘I’m done’ before putting down his weapons.

Tweeted Thibodeau: ‘He was in my backyard. I saw him arrested in front of my eyes. He is alive,’

‘The swat team arrived at my house and unloaded and started screaming in my backyard for him to surrender and he did. I watched it happen.

‘They had him sprawled on my front lawn for some time and then loaded him into the swat vehicle. They are now checking my yard for firearms.’ 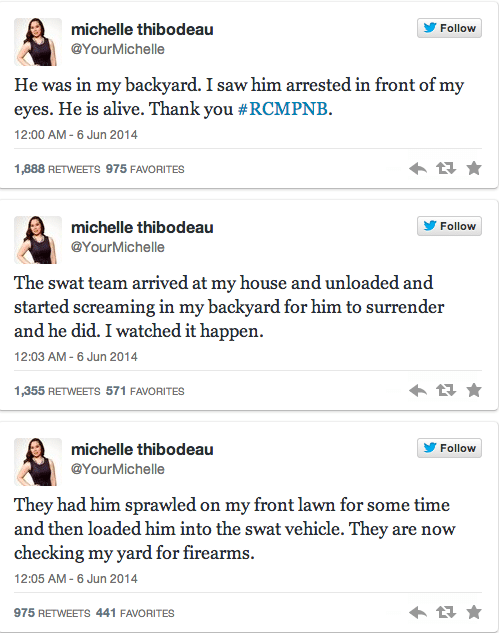 Upon news of the arrest, New Brunswick Premier David Alward issued a statement praising the RCMP for their dedication and strength – and extended condolences to grieving families.

‘These events have been among the most shocking and heart-wrenching moments in my service as premier,‘  he said.

‘To the families, friends, and colleagues of the fallen officers, although we cannot know the full impact of your suffering, your fellow New Brunswickers share the horror and pain.

‘You are not alone in your grief – our hearts, minds and prayers are with you during the difficult days ahead.’

The manhunt, which lasted nearly 30 hours, included the efforts of tactical armoured vehicles, air support major crime units, specialized teams, K-9 teams, and a legion of on-duty officers from across the province.

Since the shooting, authorities have told that they still have not come to unearth a motive for Justin Bourque’s actions, that said it appears, according to Justin Bourque’s Facebook page  that Bourque may have been preempted by a sense that life was stacked against him and that the establishment had somehow caused Bourque to feel his lot was contained and that he would like most be subjected to the authority and the might of institutions.

Amongst Bourque’s posts were several anti-police and pro-gun memes presumably highlighting Bourque’s deep distrust and antipathy with authority and the establishment. 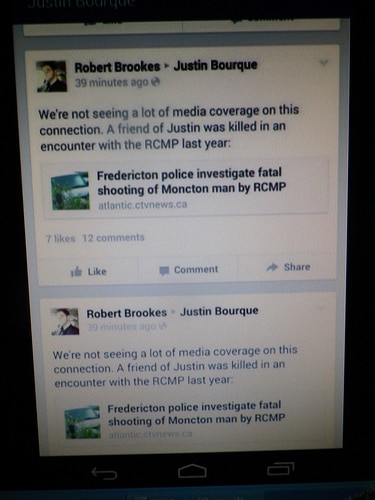 Adding intrigue to Justin Bourque’s motive is the Facebook posting of friend, Danny Levesque who was killed at the hands of authorities.

Reported atlantic.ctvnews.ca July 2013: RCMP responded to a complaint shortly before 6 a.m. Saturday of an armed man attempting to break into a vehicle near the Moncton Coliseum.

Police say officers fired their guns after tracking down the suspect in the Whitney Avenue – Jordan Avenue area of Moncton.

Asks one blog on the web: So? I must ask the question? Did Justin Bourque know Danny Levesque?

Could this have set Bourque off and fermented deep resentment against authority?

And in a prelude to the violence that would come, one chilling post made  on May 5 alludes to the discontent within Justin Bourque.

Borque would also post other musings and memes, many of them alluding to his displeasure with society and establishment and what Justin Bourque perceived to make for an unjust society which he was finally going to make right or opt out of…

‘Free men do not ask permission to bear arms,’ says one photo, with an image of Revolutionary War fighters on it. Another image shows a handgun and bullets with following text: ‘I will help you: 1. Shop for your first firearm 2. Learn firearm safety 3. Train with your firearm 4. Find ammo, mags and parts FREE.’

Another post shows the wages for various politicians, including the prime minister, compared to the income for active soldiers and soldiers on pensions.

‘Ask yourself, would you fight for the future of your children or grandchildren, or your family and friends and sons and daughters?’ says a post from April 7.

‘The answer is: no you’re too stupid to know what to fight for, cause we’re already losing the silent war you don’t wanna believe is happening.’