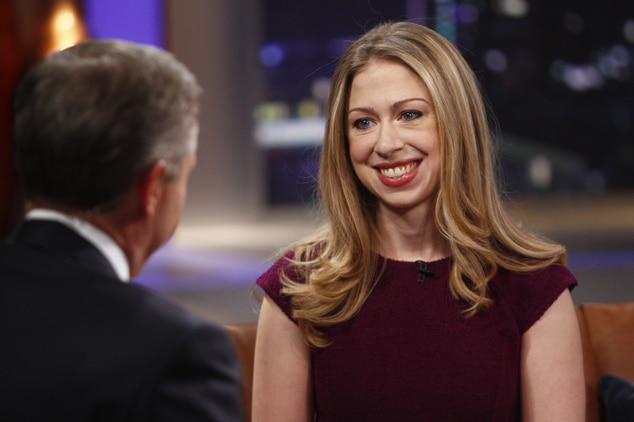 In a recent interview published over the weekend with The Telegraph, Chelsea Clinton has told that she doesn’t care about money, a nonchalant admission that has since set the media world on fire…

Instead, Chelsea Clinton who happens to be the sole offspring of political dynasty dynasty couple, Bill and Hillary Clinton who have made more money imaginable since being out of office via speaking fees, the wife of a successful hedge fund manager, Marc Mezvinsky and the recipient of a job with NBC where she is paid $600 000 a year to participate in scant segments (which is more than what the last two editor in chiefs at the NYT’s ever made working full time) along with living in a $11 million ivory tower in NYC’s flatiron district has told that ultimately she wants, like her parents, to be a philanthropist.

Which of course is why Chelsea Clinton first left lucrative opportunities on Wall st so she could instead join the Clinton Foundation, which she runs with her parents.

Told Chelsea Clinton in the interview: ‘I was curious if I could care about [money] on some fundamental level, and I couldn’t,’

‘That wasn’t the metric of success I wanted in my life.’

Although no longer employed full-time by NBC, Chelsea Clinton still commands a hefty fee of $50K a month, despite the interesting and inconvenient fact she hasn’t been featured since January of this year.

Since the beginning of the year, NBC has aired two stories by Chelsea Clinton, both on education programs targeting the underprivileged that were shown on Nightly News in January.

The news network told the Associated Press that it does expect two completed stories to air soon, however, and two others are in the works.

NBC reportedly wanted to avoid the appearance of a conflict by having her on the air around the time Hillary Clinton was doing a round of media interviews about her new book Hard Choices.

That said many who toil as journalists and editors in the media world at far substantially lower rates can’t seem to figure out why Chelsea is able to command such high fees and why NBC agrees to offer such a package, save of course the awkward suggestion for the connection to her parents who these days, if speaking fees are indicative ($200K and up) have Chelsea for a steal.

Addressing the awkward question that she is the recipient of presidential privilege, which is to say, Chelsea Clinton gets paid the big bucks because of her pedigree, not her talent employers seek, Clinton offered the following rebuke:

‘I will just always work harder [than anybody else] and hopefully perform better. And hopefully, over time, I pre-empt and erase whatever expectations people have of me not having a good work ethic, or not being smart, or not being motivated.’

A thought process which has since been met with deep suspicion and groans across the landscape. Can anyone guess why?

And here are some comments on the web that caught my attention:

From gawker: The problem with nepotism of this sort is not that the kids who benefit from it are necessarily incapable of doing the highly desirable, lucrative, and influential jobs that they get; it is that these highly desirable, lucrative, and influential jobs are not equally accessible for the non-celebukids of the world. Nepotism is unfair. It is undemocratic. It is unAmerican. To the degree that it persists, the notion of “equal opportunity” or “meritocracy” is a joke. For the daughter of the possible presidential candidate from the Democratic Party, this is not a small philosophical concern. It must, at minimum, be acknowledged, and actively fought against.

And from the web:

So I assume you will be donating your salary (which you don’t need) to charity. Easy to spout on about ideals from a lofty view. Try living week to week wondering if you can pay the bills. And maybe think before you speak!!!

She has never known anything but financial security and luxury. and has never been without a financial “security blanket”. She cannot understand that which she has never experienced. She’s never had to worry about how she’s going to cover a mobile bill never mind a mortgage payment.

Why are Americans still lapping up the drivel from this Clinton Plague? Get these liars off the stage. They care for nothing but money and power, OBVIOUSLY!

Things rich people should never, ever, ever, say, number one: “I don’t care about money.”

Come on, guys. This is like saying Tori Spelling was on 90210 because her dad created the show.