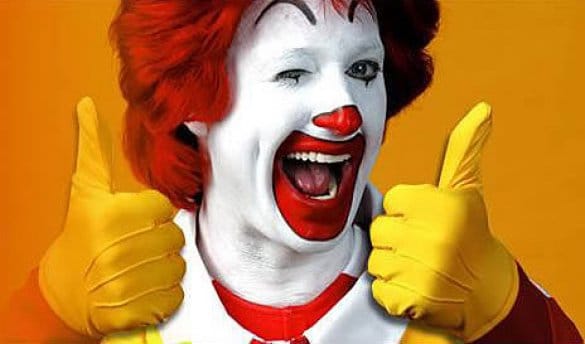 Economic class warfare took on a new look this week as McDonald’s employees in California, Michigan and NY filed lawsuits against the company and several franchise owners claiming they were underpaid, had hours erased off their timecards as well, not paid for overtime as well as being ordered to work off the clock.

The unions involved have at the same time have also sought to mandate McDonald’s increase wages to at least $15 an hour.

Oh really? McDonald’s will only hire you to be a cashier if you have a degree…

McDonald’s Intimidates its Employees into Voting for Republican Candidates

One lawsuit filed in Michigan and other Detroit franchise owners told that workers were asked to show up to work, but then ordered them to wait an hour or two without pay until enough customers showed up.

Other mandates including being made to pay for uniforms and the upkeep of those uniforms.

Reflected Jim Reif, a lawyer who filed the NY lawsuits: ‘Because McDonald’s restaurants pay so little, forcing workers to clean their Golden Arches uniforms on their own dime drives many workers.’

Told Sharnell Grandberry, a McDonald’s worker in Detroit and a plaintiff in the Michigan lawsuit: ‘Our wages are already at rock bottom,’

‘It is time for McDonald’s to stop skirting the law to pad profits. We need to get paid for the hours we work.’

McDonald’s have in turn released the following statement: ‘McDonald’s and our independent owner-operators share a concern and commitment to the well-being and fair treatment of all people who work in McDonald’s restaurants. We are currently reviewing the allegations in the lawsuits. McDonald’s and our independent franchisees are committed to undertaking a comprehensive investigation of the allegations and will take any necessary actions as they apply to our respective organizations.’