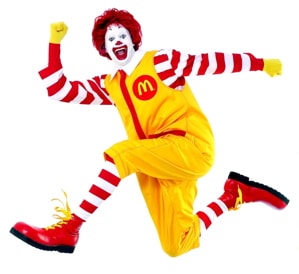 One McDonald’s in the ‘battleground state’ of Ohio has issued its employees a note listing Republican candidates that would be good for business, a move specifically prohibited by Ohio election law. The not so implicit message was that should the candidates listed become elected the employees would get raises (but probably only just enough to start getting fries with that).

The most indicting part of the note reads as follows: “As you know, the better our business does it enables us to invest in our people and our restaurants. If the right people are elected we will be able to continue with raises and benefits at or above our present levels. If others are elected, we will not.” The note then listed “John Kasich for governor, Rob Portman for Senate, and Jim Renacci for Congress.”

While the owner, Paul Siegfried has since apologized, one gets the sense the damage has already been done. In his written statement he called the handbill “an error of judgment on my part.”…”Please know it was never my intention to offend anyone”…”For those that I have offended, I sincerely apologize.” And he’s right, he hadn’t meant to offend them, only to threaten them.

One has to further wonder whether Siegfried intended to give his employees raises at all, considering, as the Huffington Post reported, ‘the handbill endorses candidates who have in essence pledged to roll back the minimum wage.” Which could give one the impression that Siegfried had been attempting to trick his employees to vote themselves deeper into poverty…

Given the monopoly McDonald’s already enjoys in impoverished areas (many of which don’t even have any grocery stores), wouldn’t this serve to only increase consumer dependence the fast food chain in question? What could be better for business than that?

A Big Mac anyone?

Isn’t it time you had a McDonald’s Greek Mac too?

McDonalds Wants to Kill Us!