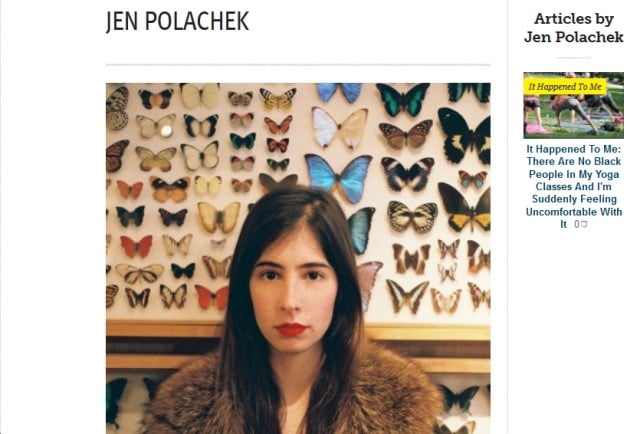 I am not sure what to think of the folk at XO Jane and why they felt the need to cover up the identity of the author’s real name after they released a misguided essay exploring one young white female’s feelings about a heavy set black woman partaking in a yoga class.

The essay itself may have had high aspirations, to speak some kind of truth of how race relations play out in the real world but instead Jen Caron failed way off the mark. Instead of compassionately exploring the theme of inclusiveness and the aspiration of a new member to experience what many white girls experience in a domain that is indeed traditionally full of white woman, the author came to betray her own insecurity of race and project her own seething doubt as to their veracity. In essence vilifying her subject matter in an attempt to make herself feel better and self important, even if that meant having an emotional breakdown.

Naturally, the essay came to be widely condemned and the author was taken to task widely on the net. She is a professional writer and writing for a national outlet whose readers have come to expect a kind of standard to maintain, and rightly so.

Yet where things became ugly for me is when I came to receive an anonymous email from a reader after I published my take last night notifying me of the fact that the Jen Caron was not Jen Caron at all but instead someone else. Or to be correct, the editors at XO Jane were so frazzled by their dropping the ball on this essay that they now felt compelled to lie and mislead readers as to the real identity of the author, who it turns out to be Jen Polachek.

Correction: the author’s name is actually Jen Polachek. The editors at XOJane (and that word is used very loosely) changed it to “Caron” and removed the part of her bio that states that she’s an Asian woman born in Tokyo once the sh_tstorm started. You can see the original bio here:

Instead of standing by their mistake and accepting that they too have something to learn and consider the team at XO Jane have only served to further alienate readers with their arrogance and self deceit. If an actor can have a tomato thrown at them on stage for a poor performance why not a professional writer and a journal for a poor showing?

Then again what are we to think? Ultimately everyone is entitled to their point of view even at the risk of sounding politically incorrect. But dare I say that there is some merit in what Jen Polachek sought to explore, even if in the end she betrayed her own insecurity and hostile feelings of black people.

Curious as to what to make of the topic. I sent a few letters around and I received the following responses which I have chosen to anonymously publish, that I think explore the fragile dynamics at play that perhaps the author sought to explore but instead made a mess of by only vilifying her subject matter rather than simply accepting that yes a black person had indeed chosen to take a yoga class and how commendable of her for wishing to be included in a group that traditionally is the privileged domain of skinny white bitches. Please let’s call a spade a spade.

Wrote back a few responses:

so, that black woman in that yoga class feels horrible, yes, and she can almost to 50 % thank her own people for that bad feeling…cause unfortunately that s what people remember, not the good part.

it s not about being black in general cause africans have  much better behavior i noticed, or people from the islands…and look at black people in london, paris..all well mannered, for the big part.

the problem is with the afro americans…due to their history yes, but also due to their current behavior.

yeah, i mean in only x years since arriving in nyc,  i turned from totally neutral towards afro americans to totally careful and suspicious.

in that time I am and finding myself in situations that weren’t fun or could have turned out dangerous, had i said something. most white people keep quiet but try to avoid black people to not get in trouble.

so that s the new situation…keeping quiet although you are being harrassed?? How many times have you wanted to tell the big black guy in the subway to turn off his ghetto blaster? How many times have you begged for the group of black girls to stop screaming at each other and to be respectful of other passengers? I am not saying only black people do this. But it is something I have noticed here often in NYC and no one stands up to it. Everyone looks away feeling guilty to say a thing and they know this so they continue.

so, if a black person walks into a yoga class – the thing that some people may instinctively think is ‘ oh no, please, no problems in here now…’.

cause you aren’t allowed to look at them, cause when you do, you may get in trouble right away…they see racism where there isn t any often. so that stresses everyone out.

and they are agressive…so that s what you don’t want in your yoga class. it s as simple as that. i think that s what people think in that class. not more and not less. you can go into that whole yoga theory bullshit, like that writer did. but then you also have to talk about the fact, that whhite people treat each other like shit in a yoga class and in a yoga studio. the differenc eis though – if you behave like shit towards a white person in the locker room – no problem, we are used to it. if you do that to a black woman she will see it immediately as racism and the war is open. right there, in the locker room  ‘what do ya looking at biiiitchhh.?””

yes, that writer sees it from a very entitled arrogant white point of view (oh, we have to be nice to THESE PEOPLE, as in these weird people outside ouer little box). that whole text sounds like that…and she comes with her white theory about PC and yoga and a good world. blah blah. but she would be the last person in the world who would want to have a black person live with her in her apartment…

cause she doesnt mention the fact, that white people are also shit in the locker room

And what does XO Jane editors think? Have a read below, see what you think.

Personally I am not believing it. It’s full of shit. XO Jane are full of shit. They should have stood by their author even if she was wrong and owned up to their misguided errors. It is fine to make mistakes. But one would expect some degree of responsibility after making those errors and owning up. XO Jane haven’t owned up to shit.

XO Jane managing editor Rebecca Carroll (who happens to be African American wrote this on Facebook:

OK before you all flip the f*k out — this piece on xoJane today about a skinny white woman’s experience in a Brooklyn yoga studio is blowing up with hate. I assigned this piece after the author, who I know from my neighborhood, and with whom I was having a casual conversation, felt she could share this experience with me — I was impressed by her candor in telling me, a black woman she doesn’t even know all that well. I told her to write about the experience. This is the result. I didn’t edit or change much. This is her first person experience, which I think is very likely the experience (admittedly seeped in white privilege) of a lot of folks. For that reason, I felt it was a narrative that should be heard.

The other part of this — the fairly vitriolic comments — is about my being a black editor who should have made a better judgement call (according to them) about what constitutes suitable race content. As if I am now the official president of the Black Ethics Committee at xoJane. I have many feelings about this, and will address later. Too overwhelmed by the hate right now.