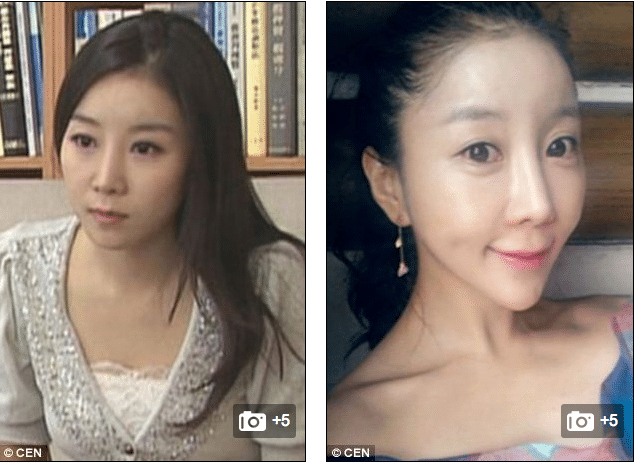 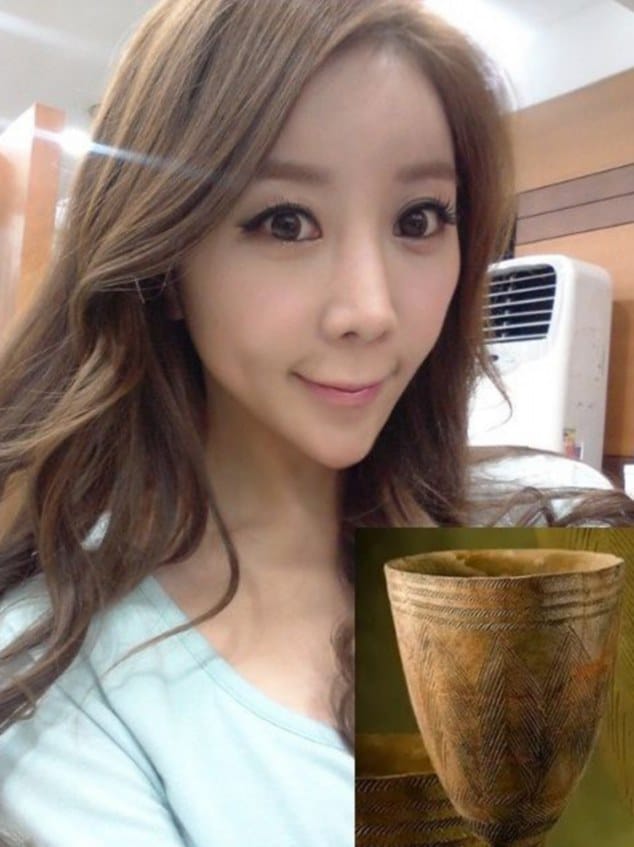 A South Korean reporter has caused the nation to wonder out aloud if she has ruined her face after electing to undergo reconstructive surgery which dramatically altered the shape of her jaw.

The unnamed woman, a reporter on a South Korean TV channel is said to have undergone the surgery in a bid to achieve the dainty heart shaped face desired by many east Asian women.

Of merit is the fact that South Koreans currently have more plastic surgery than in any country, with the practice most prevalent among 19-49 year olds. Research tells one in five Seoul women at some point go under the knife.

In the end the South Korean reporter transforms herself from a seemingly attractive normal looking woman with balanced features to that as some have described, an alien with an unusually pointed chin.

Retorted one forum commentator: ‘Someone please tell me this was Photoshopped!’ while another quipped that ‘it looks like you could plow a field with that chin,’

Asked another: ‘Is it really possible to taper someone’s chin that much?

‘She really doesn’t know what true beauty is.’

With a rabid appetite to approximate Western appearing aesthetics and celebrity idols, doctors have brought out a range of surgical procedures which have taken hold with many young women, including double eyelid surgery – which reduces excess skin in the upper eyelid to make the eyes appear bigger, lipoplasty – which uses high-frequency sound waves to eliminate fat – and nose jobs.

With many women feeling the pressure to conform to societal expectations, a large percentage of women undertake surgery with the hopes of securing better jobs and marrying more successful men.

Instead of rebelling against the cultural norm, they’re pushing each other to conform.

Pundits have told that the South Korean reporter most likely had her jaw re aligned and parts of it shaved off the bone to create a heart shape.

Jaw surgery is usually a last resort effort to correct facial deformities where people have been unable to chew properly due to an excessive over or underbite. Nevertheless the surgery has become a popular elective surgery by many in South Korea seeking purely cosmetic changes, this despite the many risks it poses.

With the proliferation of new clinics offering such surgery the once exhorbitant price has now come within reach of many.

Despite concerns of the risks that such surgeries pose, the practice according to studies is set to continue to boom.

Yeah lets judge Korea. America totally isn’t a country catering to blond hair, blue eyes, spray on tans, fake titties, butt injections, liposuction, and nose-jobs. This totally isn’t the country where people have given their 16 year old daughter nose jobs or boob jobs for birthday presents. This TOTALLY isn’t the country where women get cosmetic surgery on ridiculous things such as their vagina’s.

If she’s happy with the way she looks now, that’s all that matters. You all calling her ugly now isn’t going to reverse what she did to herself but could push her to do more. Perhaps people were saying the same RUDE things about her when she looked like her before picture, which by the way she’s had surgery in that photo too.

Instead of judging her for doing what she thought would be best for her, make a change in yourselves and omit insulting peoples looks from your behavior. No one wakes up one day hating who they are. They are gradually pushed there by thoughtless comments like many here.