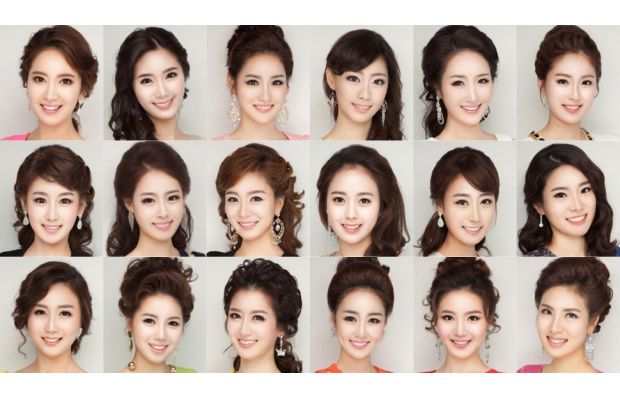 Causing some degree of madness in media world is the dirty secret that Miss Korea 2013 contestants happen to all look disarmingly too similar. Which prompted the question, why?

complex: The New York Times found in a 2009 survey that one out of every five women in the capital of South Korea between the ages of 19-49 have undergone plastic surgery for some place on their bodies. The photos from the beauty pageant are raising concerns over self image in the country, with the suggestion that procedures aim to make every woman look the same.

Hmm, which leads to another question. Why is everyone so hung up about plastic surgery in Korea in the first place?

Which takes us to reddit where commentators took a stab at trying to figure out why everyone is so obsessed with their looks to the point where they book an afternoon appointment to make their eyelids more Western the way some of you mull over which lipstick shade to buy at the beauty bar.

Yet before we mull what reddit thinks of all of this, jezebel had a stab at the quandary as well and came up with the notion that actually the girls who were earmarked courtesy of a Japanese blog are actually not Miss Korea 2013 contestants but rather Miss Seoul contestants.

Kotaku then goes on to tell that in fact the contestants in actuality look nothing like each other (because this would be racist?) on account of all the retouching the images underwent and the fact that pageants employ make up artists and hairstylists who all copy each other. Just like any other pageant. Which of course brought up the idea that a lot of US pageant girls also look alike.

In the end it all raises the issue of what counts for beautiful and what some in the end are willing to do to arrive closer to a universally held idea of beautiful. Whether it plastic surgery procedures, big hair or fake tans or even the way photos are photoshopped for us to digest so we are constantly reminded of what ought to be held as beautiful. It isn’t so much the subject matter that is to be held for examination it is us a culture at large as how they attempt to regard beauty in the first place…it certainly informs the participant.

That said let’s have a look at what one reddit commentator had to say below who managed to get a staggering amount of upvotes.

Have a read and then ask yourself, why do some of us go out of our way for beauty, what does being beautiful actually mean and in Korean culture does beauty really have something to do with approximating Western standards and even features and if so why? Or is it all just an over reaction and no one in Korea actually looks alike even if it is no secret that Korean society is the largest consumers of plastic surgery in the world per capita. But why?

I live in Seoul.

Relevant link to show how great k surgeons are:

1) You arent racist. Those women in fact do look unnervingly similar and yes, Koreans think so too. This is because they all get the exact same plastic surgeries and the surgeons follow the same formulas for noses and eyes and everything else theyve had done (fillers, cheek and forehead implants, eye surgery, nose surgery, jaw reduction, breast job, calf muscle job, fat grafting etc). Every single one of them has had nose and eye surgery. Those faces costed those girls thousands. Also dont underestimate makeup, theyve got it caked on in a similar style.

2). Those are called the Korean plastic face look. In certain areas of Seoul, you would think all the women are sisters because they look so similar due to same surgeries.
Koreans cant tell them apart ether. Theyre jokingly referred to as “Samsung Robots”

3). Most korean women dont look like those women. Not anywhere near actually. Most dont have the money to fund their body dysmorphia. Some actually have self esteem. Without the plastic surgery, korean women are very diverse looking and easily can be told apart. The surgery takes away their individuality and uniqueness and its sad. Most are beautiful without it but telling them that their korean ethnic features are infact lovely is as effective as screaming at a brick wall. They wont believe you because theyve been brainwashed to think westernization of their features is superior, i dont think they want to look white, but a mix of white and asian and definitely less Korean.

4). Its weird to see the real plastic ones with kids. The kids look adopted. I always wonder how they explain to their kids later on why they look so different, “Dont worry when youre old enough we will have a surgeon fix the ugly parts just like mommy did!”. And yes many korean men DO ask for old pics before getting serious about a woman.

Koreans are lovely but this part of the culture is just sad imo because no one ever addresses WHY they feel the need to follow a very narrow beauty standard that can only be achieved through invasive surgery. Especially when they’re beautiful naturally. Sigh