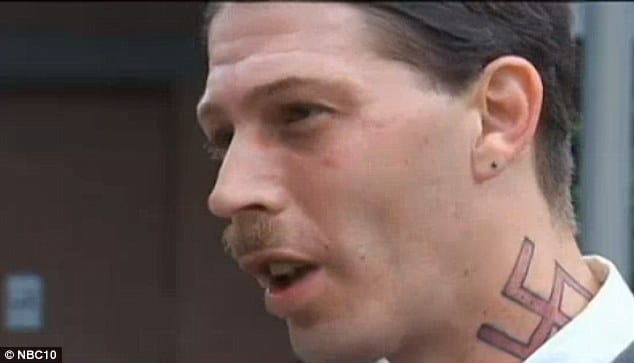 Heath Campbell, white supremist announces he and his fiance plan to call their baby Eva Braun if it’s a girl.

Neo Nazi dad, Heath Campbell has caused consternation after the 40 year old neo Nazi has told child services has taken away his newest child because he chose to name the child after a semitic figure, Adolf Hitler‘s wife, Eva Braun.

To date, Heath Campbell already has 9 children with five different women, yet not one of the children is in his custody.

This also includes the latest child born courtesy of Campbell’s loins to fiance, 22 year old Bethanie Zito, who Campbell went on to call Eva Braun after she was born this November. That child was taken away from the custody of the pair two days after she was born.

New Jersey Child Services has argued that they have done so, as in other instances because of concern for the children’s safety. An assertion that Heath Campbell vigorously disputes.

Explained Campbell: ‘I’m not allowed to have children because I’m a Nazi,’

‘That’s what they’re saying. Well, I’ll stop making them when they stop taking them.’

Zito for her part has told that she was getting ready to leave hospital when nurses took away the little girl and workers from the Franklin County Children and Youth Service announced they were taking her.

Told Zito:  ‘I got hysterical. I had just been checked out. I was breast-feeding my daughter for two days straight. I changed her. I had clothes on her.’

Campbell, who lives off government assistance, had not yet seen his new daughter because he was miles away in NJ and had been unable to afford to travel to see her. Zito had given birth in a Pennsylvania hospital.

But Zito’s lawyer said the couple’s Nazi views were not the reason the child was taken. Instead, it was because Zito’s first child, a son, had also previously been taken in to state custody. A child already in state custody is enough for officials to remove a child if there is an assumption of risk.

Campbell previously claimed that Zito got pregnant while on the pill, “She was on the pill, but we don’t believe in abortions. That’s murder. Maybe God just doesn’t want the white race to die.”

Campbell and his former wife, Deborah Campbell, went on to lose custody of their 18 month old son and three other children with Nazi-inspired names.

Campbell’s previous partners have in the past sought police relief citing domestic abuse as well as death threats.

A court hearing in the custody cases is scheduled for Monday.