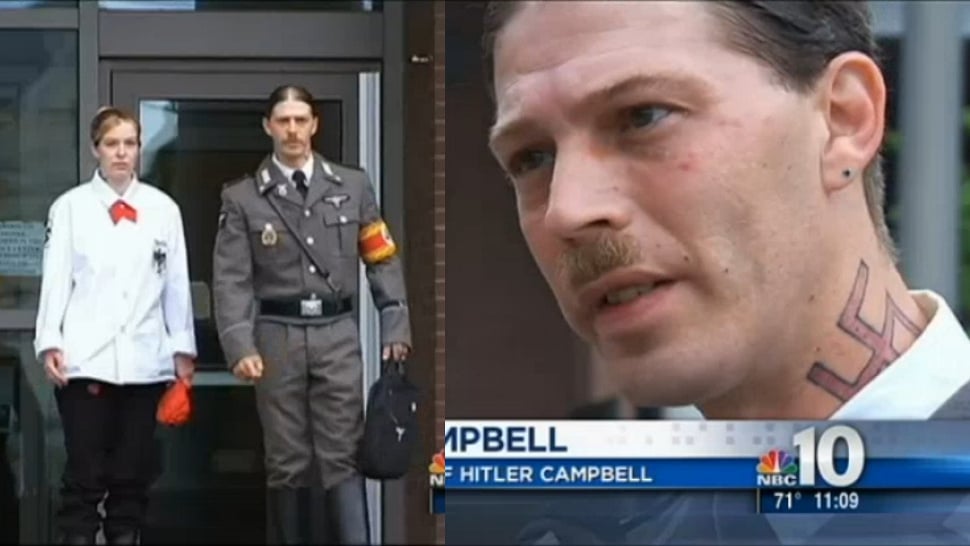 Heath Campbell, white supremist announces he and his fiance plan to call their baby Eva Braun if it’s a girl.

Making news is that of one New Jersey father, Heath Campbell who has been embroiled in a bitter custody dispute with New Jersey state over his and estranged wife, Deborah, four children , one of whom so happens to interestingly be named Adolf Hitler Campbell. To date Adolf and his younger two siblings have been given away for adoption whilst Campbell fights for visitation rights of his youngest child who was taken away by child services hours after the child was born purportedly on fears that the child would be harmed as purportedly the other three children were.

Yet to  best get a handle to what degree of discord Campbell and co have been manifesting can best be reflected by the fact that earlier today Campbell turned up to a custody hearing wearing a Nazi uniform.

The drama that is Heath Campbell first came to the fore back in December 2008, when a ShopRite outlet refused to put their son’s name on a birthday cake.  At the time the couple would go on to complain the refusal constituted discrimination.

It wasn’t long after that drama that gawker go on to tell how then-3-year-old Adolf Hitler and his two little sisters Joyce Lynn Aryan Nation and Honszlynn Hinler Jeannie were subsequently removed from their home by the New Jersey Division of Youth and Family Services, and placed in foster care. Nbc10  go on to tell that Campbell has not seen Adolf and the other two children in two years and have now been put up for adoption. The fourth and youngest child who Campbell is pressing to see is currently in foster care.

At the time the state held that there was sufficient evidence to prove that Adolf Hitler and his sisters were being abused and neglected. His parents nonetheless differed with the state’s view and insisted the real reason the children were removed from their care was because of their names.

Which brings us back to Heath Campbell’s court appearance today, who had turned up to to petition a family court judge for the right to visit his youngest son, Hons.

Hons, incidentally is the only child of Campbell’s not to be given a Nazi-inspired name. Nevertheless  Hons was picked up by state child services representatives just hours after he was born back in November 2011.

Told Campbell to  NBC10:  “I’m going to tell the judge, I love my children. I wanna be a father, let me be it. Let me prove to the world that I am a good father.”

NJ also go on to explain that Campbell has been unemployed throughout his adult life because of medical and psychological disabilities. The outlet also goes on to mention a court report told how Campbell can not read. The report also went on to tell that Campbell was married twice before and does not support or see his other children.

Gawker also reveals since losing custody of his children and separating from his wife, Campbell has kept busy by founding the pro-Nazi organization “Hitler’s Order.” I know you are all gushing from the gills too.

Arriving  in court this morning dressed in full Nazi regalia, and accompanied by a member of his organization, Bethanie White, who was also flashing Nazi signs, Campbell aimed to impress.

Asked if he felt his choice of attire was appropriate given his situation, Campbell responded, “Well, if they’re good judges, and they’re good people, they’ll look within and not what’s on the outside.”

Which of course is a kind of oxymoron because it is obvious that Campbell has every intention of letting everyone know what is on the outside, but of course if we are to look at what’s really on the inside one needn’t forget that Nazi ideology championed anti Semitism, racism and other fun peccadilloes which saw the death of over 6 million Jews during world war 2.

Which raises the awkward question should a man be denied access to his family simply because of his belief system which many find quite troubling or is it simply the case that Heath Campbell was indeed abusive and neglectful towards his children?

And then there was these thoughtful comment that made me wonder as well:

First of all, let me make clear that I think this dad is horrible to be naming his kids after such a murderer as Hitler was. I can, however, pose a couple of questions.

What if I decide to name my son Mao Tse Dong, or give my daughter Josephina the middle name Stalin? Both of those two, Mao and Stalin, where even bigger killers than Hitler. Would that constitute abuse? What if my dogs name was Pol Pot, is that animal cruelty? This Nazi loser’s values are just horrific, but my question is, did he beat his kids?

If he didn’t commit any act of physical violence, then what is really the issue here? Is naming your children after mass murderers an act of abuse? What if I named my kid Lyndon B. Johnson. George W. Bush? Wouldn’t that be an act of abuse, knowing full well what those two assholes did to Vietnam and Iraq, respectively?

It could very well be, that its not really an issue of child abuse, but actually the issue is the legal rights to raise your kids with values that are deemed ‘objectionable’, which begs the question, WHOSE VALUES?

The problem with giving a child a name like this is not purely because of the acts the person they are named after committed, but because of the ridicule, abuse and discrimination that may be heaped upon the child by others due to a choice made by the parents. For example, should they be allowed give their children other harmful names like “Harry Scrotum”, “Susie Syphilis”, or “Andrew Douchebag” (aka A. Douchebag).

While I think some countries have gone to a bit of an extreme in preventing parents from giving names like this (see Iceland for an example), there are a lot of people who are unfortunately too selfish to understand what effect the name they give their child will have on that child’s development. Some celebrity kids names are just as bad in that regard, but at least they aren’t outright offensive.