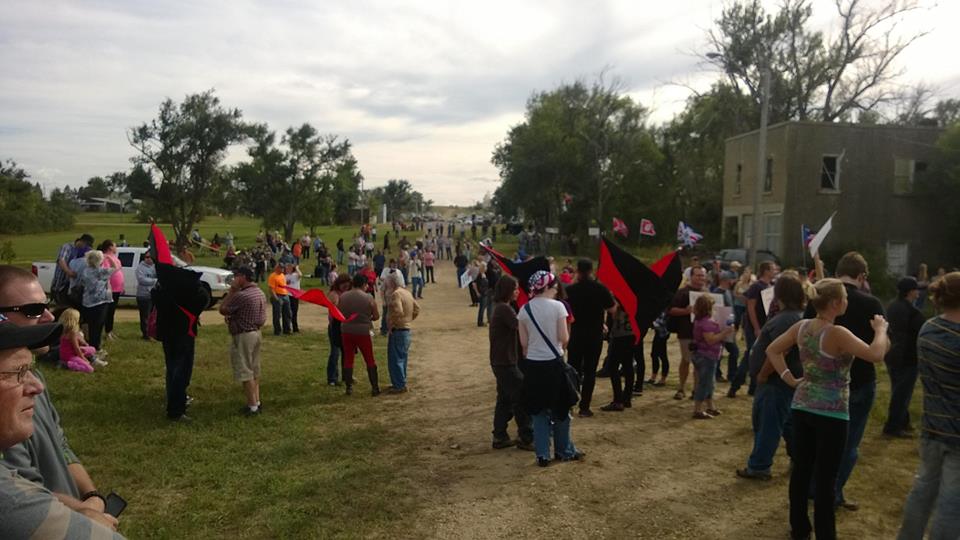 A band of white supremacists are bracing themselves against protester intervention after having publicly sought to turn the small North Dakota town of Leith into a whites only enclave.

The band, the ‘U.S. National Socialist Movement,’ said to be America’s largest neo-Nazi organization according to non profit civil right association, the Southern Poverty Law Center, which tracks hate groups went on to tell the following:

“We have every intention of legally assuming control of the local government,”

Reiterated the group’s leader, Jeff Schoep who plans to introduce the organization to the community:  “We come with good will and faith.”

The group hopes to move enough members into Leith – population 17 – to take over the local government.

Records go on to show white supremacist activist Craig Cobb has over the course of the last year buying adjoining properties in the town of Leith. Interestingly State health department officials said recently that they were considering condemning Cobb’s property over health code issues related to an outdoor toilet in Cobb’s yard and other water safety issues.

According to the white supremacists they seek to move in and set up a ‘pioneer little Europe.’ 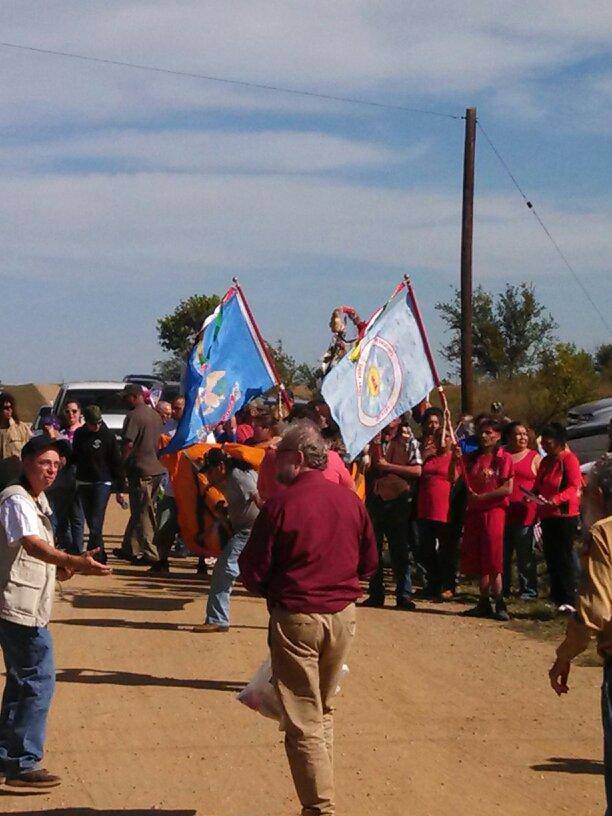 The nydailynews goes on to note in an in an interview with WXMB-TV in Bismarck, Craig Cobb told he had gotten a lot of offers to buy up land from what he termed like-minded people who believe white people should not be punished for wanting to live near each other.

“It’s fine for all these other minorities, but not us,”

“If you merely speak about it, you’re going to be defamed in this country.”

Jeff Schoep went on to tell that visitors would inspect the new property, raise ceremonial flag poles, and hold a town meeting and a news conference.

“We know that opinion is divided in the town and in the media,” Schoep said in the statement, adding that the trip was “a symbolic gesture of good will and faith.”

Told another NSA member: “It is important for us to be here because we are fighting for white Americans in America. We don’t hate. We’re not about that.”

Nevertheless not everyone is pleased with the white supremacists efforts to turn the town of Leith into a whites only enclave, including grassroots group, UnityND, who over the weekend set about using social media to bring protesters to the area to protest the National Socialist’s presence.

Told the anti racist group via a statement on facebook: “We are planning a true grassroots peaceful protest to demonstrate that we are united in a stance against hatred, violence and prejudice,”

“Join us as we take to main street rural America to fight against racism.” 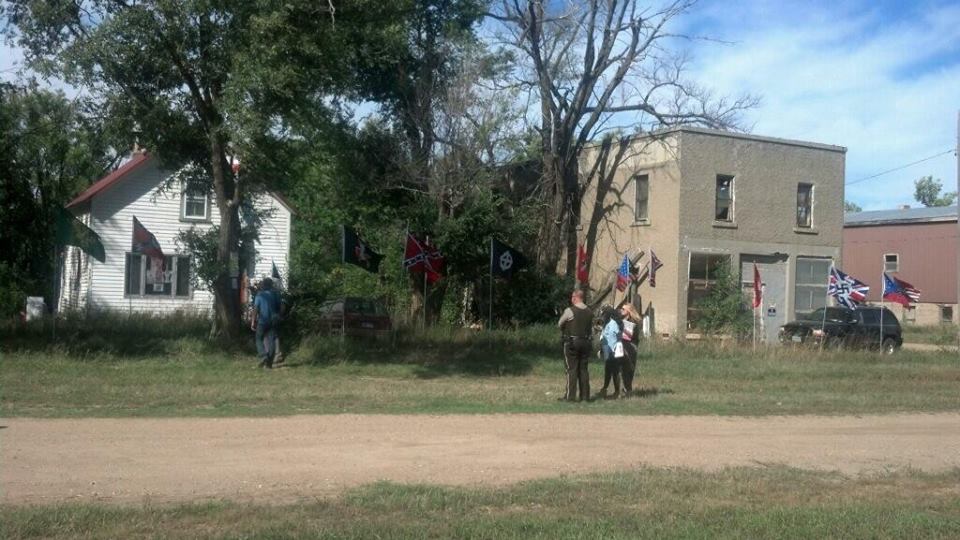 Bracing for what could be a bout of fireworks, Grant County Sheriff Steve Bay who has already gone on to beef up patrolling of the area has gone on to offer the following:

“Both sides say they plan on having their demonstrations,”

“They have both indicated to me that they will be peaceful demonstrations. They may be a little loud, but peaceful.”

Went on to note Bay: “There’s certain rights that they have, and as long as they stay within the law, we’re not going to get involved.”

The protesters (said to total circa 350) who first congregated yesterday went on shouting slogans like “Go Home” and “No Hate in Our State,” included more than 200 Native Americans from the nearby Standing Rock Reservation, as well as other reservations from North and South Dakota.

The protests which are expected to continue on today have tellingly been met with riot police but commentators on the UnityND’s facebook page went on to assert that protests have been peaceful whilst members have been forceful in attempting to address their concern that hatred and bigotry not be condoned in the community.

Wrote tellingly one commentator, Scott Garman: “This is where we stop them. If we don’t, they will move on to the next town and the next. This is where it ends. At that crappy white house across the street.”

Schoep said the protesters across the street were of no account to him: “These are outside agitators, some Reds from Minneapolis, and you’ll never see them again.” He said he was proud of Cobb’s work in Leith and said with enough followers, “then we’re in charge of city government. We have to start somewhere and then we can spread out from here.”

A takeover of Grant County government and seats in the Legislature are possible next steps, he said.

Of note though is the state’s reluctance to pursue the matter legally against the white supremacists and whether in fact the state can or ought to deny them the right to purchase property despite their political beliefs.

Leith Mayor Ryan Schock said city officials were discussing the possibility of unincorporating the city and turning it back over to the county to scuttle the hate group’s plans. 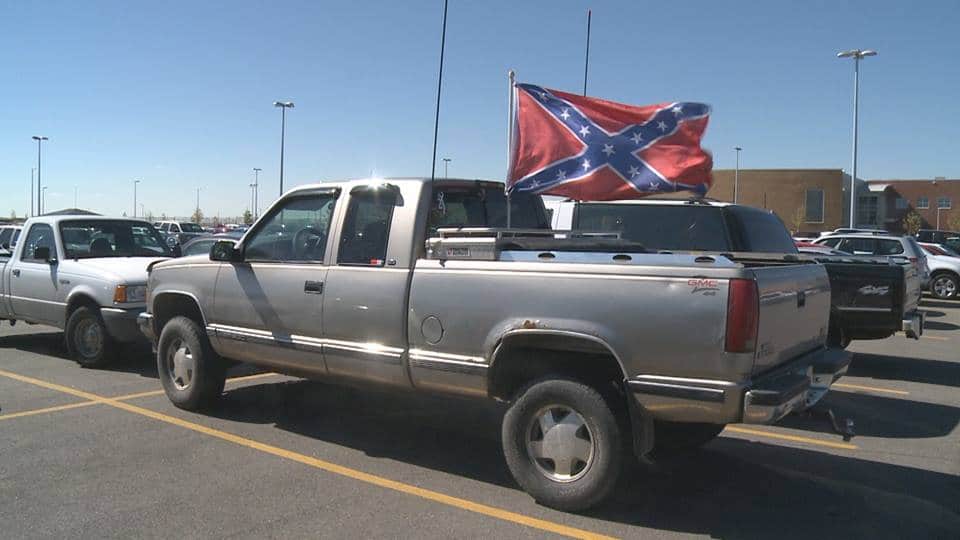