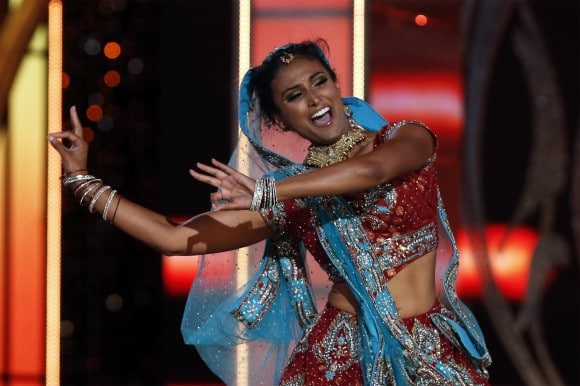 Newly crowned Miss America Nina Davuluri has gone on to receive wide condemnation after the Miss New York went on to win the title.

Upon winning the Miss America pageant, social media went into overdrive to condemn the 24 year old from Fayetteville, New York, near Syracuse, who is of Indian descent for appearing too foreign.

Told one twitter user: “How the f–k does a foreigner win miss America? She is a Arab! #idiots,”

“If you’re #MissAmerica you should have to be American,”

“9/11 was 4 days ago and she gets miss America?” chimed another individual who later likened Nina Davuluri to a photo of a Middle Eastern man wielding a firearm. Naturally…

‘An Asian and an Indian?? I thought this was Miss America!?’

‘How can you be Miss AMERICA and look like you should be a gas station clerk or motel owner? this country though’ #MissAmerica

Contemplated another twitter user: ‘I’m not a racist…’ then goes on to question how Miss Davuluri can represent America ‘doing an Indonesian dance’.

Another user who calls herself ‘FoxxiLiberal‘ (@FoxxiLiberal) and describes herself as a ‘humanist,’ and ‘prochoice’ posted: ‘When will a white woman win Miss American? Ever?’

Elizabeth (@EJRBuckeye) said: ‘Well they just picked a Muslim for Miss America. That must’ve made Obama happy. Maybe he had a vote.’

Offered another user, Meredith Talley (@MeredithRoanell): ‘This is Miss America… Not Miss Foreign Country.’ The UK’s dailymail goes on to note that Talley’s twitter profile disappeared shortly after her tweet ended up being shared by numerous people, whilst most were shocked at her comment.

Responding to the condemnation against her, Davuluri told the Associated Press the following:

“I have to rise above that. I always viewed myself as first and foremost American.”

“I’m so happy this organization has embraced diversity. I’m thankful there are children watching at home who can finally relate to a new Miss America.”

But not everyone could necessarily fathom that Nina Davuluri may simply be the ongoing reflection and ever changing face of America, including some in the media, point in case, conservative commentator, Todd Starnes of Fox news who offered the following:

Adding fuel to the fodder were accusations that Nina Davuluri’s win last night at Atlantic City came after she bad-mouthed others entrants to win the contest.

Davuluri has gone on to tell this morning she was still in disbelief that she had won, along with many other Americans who have a preferred view of what counts for being American…