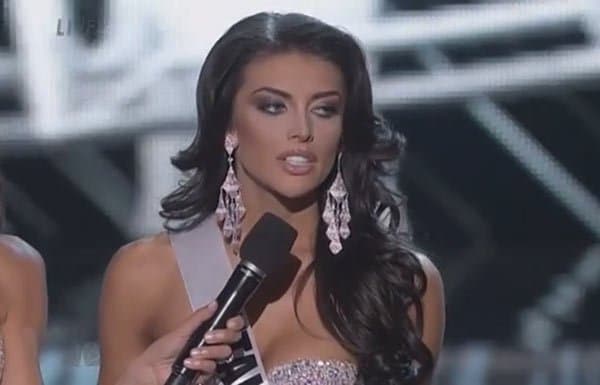 Miss Connecticut USA, Erin Brady is the the new Miss USA. But that story line has been eclipsed by one attempting to compare Miss Utah Marissa Powell‘s flub of a question on equal pay (yes at the Miss USA Pageant no less, not on Meet the Press) with the notorious one by the former Miss South Carolina a few years ago.

Deadpsin was quite harsh: What you’ve just said is one of the most insanely idiotic things I have ever heard. At no point in your rambling, incoherent response were you even close to anything that could be considered a rational thought. Everyone in this room is now dumber for having listened to it. I award you no points, and may God have mercy on your soul.

First, I would like to know what non-politically correct dogmatic response would have been forthcoming from the lips of any of the critics who dismissed Miss Utah Marissa Powell as an imbecile for hesitating on a question, the answer to which, is not suited to a quick sound bite. Clearly the ongoing inequality between wages paid to women and men is not the easiest of issues to solve because some great minds have made little progress in resolving the conundrum of this inequity in our society.

Feminists, economists, labor leaders and politicians/legislators have long been quite aware of this issue and its significance, and the particular pain this brings to families where the woman is the primary if not exclusive wage earner, yet we have in 2013 still not bridged the gap. Do they simply prefer the narrative to an actual solution or is a solution more difficult to come by?

Yet, I even doubt that that the woman asking the question: Nene Leakes – a “Real Housewife from Atlanta” who is part of America’s culture of distraction, even had the ability to give a useful response beyond launching a platitude about how the world is inherently less fair to women. If anything that show is frankly what is wrong with America. Sumo wrestling by crass women in high heals in various upscale urban and suburban locales is the new normal?

Powell at least had the instincts to go to begin her answer with ‘education’ and ‘enlightenment’ — policy shifts will begin when we stop having elitists trying to prey on and dumb down the entire population and invest in building our society from the bottom up. And Marissa was actually quite correct that right now the issue of ‘job creation’ period seems to be a primary concern in an America where well paying jobs have been evaporating along with the middle class at an alarming rate.

So while economists, feminists and historians can argue about the proper approach to rectify this problem or try to get their arms around the complexity of this issues surrounding it, that Miss Utah did not give a pithy response, must somehow illustrate that she is an idiot right? Call me crazy but I do not think Miss Utah is a moron. She may have just gotten blindsided because I doubt that the individual asking the question actually had a better answer, but perhaps just a more socially acceptable one..

We are all the idiots, the lamestream media just found someone to play ‘Pin the Tail on the Donkey‘ with so bloggers could have a few chuckles.

The fact is that America needs a more flexible and diverse and comprehensive national education policy that (i) prepares young people to be more productive and useful immediately to going concerns and (ii) inspires greater creativity and entrepreneurialism to help young people better evolve in a wide open global economy so that maybe more women can work for themselves rather than a bigoted employer. And I guarantee you than not even the questioner understands this and (iii) Job Creation will come from America having a more skilled, productive and able workforce and enlightened/wordly entrepreneurial class that can compete internationally as well as make America a better place to grow a company.