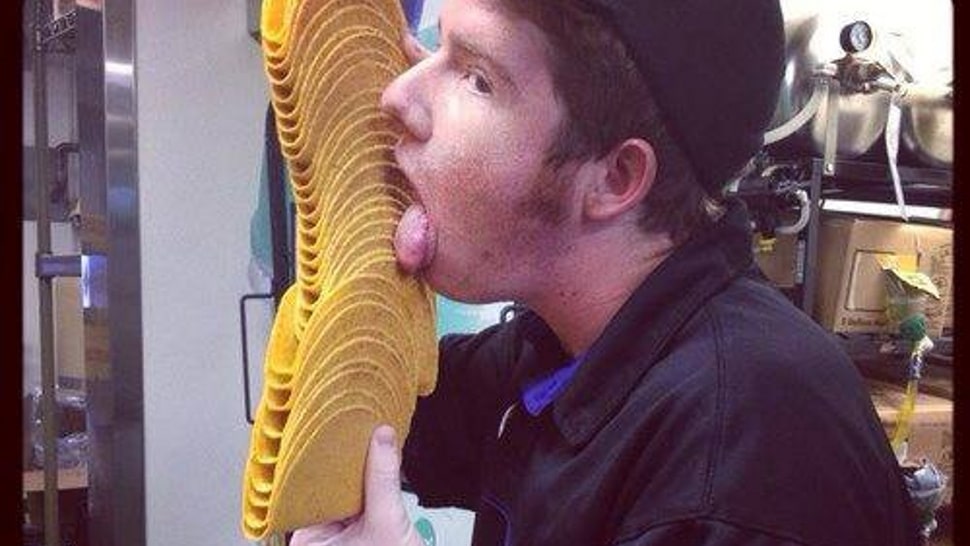 Taco Bell wants to tell you that it doesn’t entirely use beef in their tacos.

Making the rounds today is the above undated photo depicting a Taco Bell employee licking a stack of taco shells which naturally has led to many wondering how scrumptious all thosetacos really are.

Posted on the Taco Bell Facebook page the image has led to many wondering how sanitary the fast food outlet’s fare really is.

Told an accompanying comment: “This sure says a lot about your employees, food treatment, and what they post on the internet.”

Though the exact location of the Taco Bell where this scrumptious behavior took place remains unclear, several Facebook commenters are claiming the photo was snapped in Ridgecrest, California.

Wrote one individual on facebook: “I know the person in the photo, not just from work, but from school as well; and I know that he is not dumb enough to lick a stack of taco shells and then serve them to the public.”

Others are skeptical about assuming the tainted shells were trashed and not served.

“First of all, he’s wearing a taco bell uniform.. He is in taco bell, and he is licking bulk taco shells.. What are we supposed to think?” another person responded to the pic.

Wrote another individual, who seems to know the Taco Licker : “He doesn’t work there anymore. And I’m disappointed to say, that yes, it was unprofessional and lacked foresight, its clear that it was a joke, and anyone with half a brain can tell that. At the end of the day, Taco Bell will continue to thrive as huge company, and you’ll all forget about this in the next 2 weeks as you move onto the next social trend.”

Interestingly the outlet has yet to respond to concerns raised by its customers concerning the possibility that these shells were earmarked for public consumption. Can anyone guess why?

Are you in the mood for a Taco Bell today…?

And then there were these following comments on the web that had me wondering as well:

I was just going to say… this isn’t going to stop anyone who already eats Taco Bell from eating more Taco Bell.