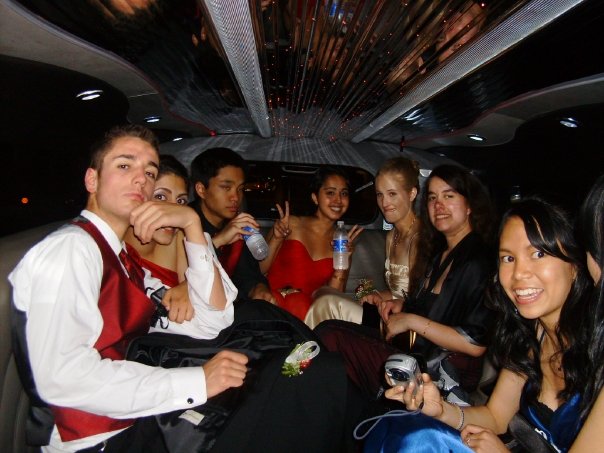 This is the story of Richard Madison. He was accused of being drunk while driving 23 teens to prom last Saturday.

I remember my high school prom, vaguely. Taking shots of peppermint schnapps out of a Dasani water bottle was quickly followed up with drinking Jack Daniels from a flask while dancing to Lil John and the East Side Boys. Somewhere in the background my history teacher mumbled something about ‘stupid fucking teenagers’. You know, it was a pretty normal prom.

The point is that prom was simultaneously the stupidest and most electrifying moment of my life up until then, I assure you I have done far worse things since. Excluding the kids who went with their mom’s, prom has a tendency to be pretty exciting. So that is why I wasn’t the least bit surprised to find that a Mr. Richard Madison, a limo driver in Chicago was accused of driving drunk while escorting 23 teenagers to prom.

The folks over at the UK’s Daily Mail reported on this topic not too long ago. It turns out that this guy picked up the kids for prom early in the evening; presumably it was around 7, once all the bitching happy hour deals were over.

On the way to prom this guy proceeded to haphazardly cut off cars, swerve over medians, and pretty much said ‘fuck it’ to any rational driving law. The teenagers in the back actually reported to My Fox Chicago  that they became so distraught that they actually phoned their parents to inform them that their limo driver was , in fact, driving like he was bat-shit crazy.

Kelsey Dano, a passenger in the limo, reported to the Chicago Sun-Times that “We knew something was up but we weren’t quite sure what and we’re happy that we made it there safe without getting hurt and that things were taken into responsibility once we got there.”

Where did they get too exactly? Prom, eventually, but they didn’t arrive at prom until after this guy tried to drop them off at the wrong hotel, five miles down the road. That’s right; he drove like a man with a death wish just so that he could bring the prom goers to the wrong address. Well, he made it to the right address eventually, presumably in a similarly drunken, sloppy fashion. He was apprehended by police and taken into custody once he arrived at the hotel. As for the young teens, I can only assume they had the most bitchin time at prom later that night. See… happy ending.

Why wasn’t I surprised to learn about this, you ask? Well, as I see it there are essentially two explanations for this. Pay attention to my wild speculations now; if it turns out that these allegations are true and this guy was indeed shitfaced while driving these teens to prom, then there are really only two explanations.

1.This guy was so “cool” that he decided to bring along his own social beverages and party like it was 1983. Maybe he cracked a beer as he careened down the freeway, senselessly endangering everybody’s lives. After all, nothing screams “cool motherfucker” quite like drinking with high school kids. But, even I find this hypothesis to be a stretch

2. It could be that out of sheer insanity, caused from being in such close proximity to that many teenagers, that Mr. Madison was forced to the bottle so as to responsibly manage his anxiety. I mean really, have you ever hung out with teenagers? They are infuriating. I feel like  I could use a drink every time a gaggle of teens sits behind me at the movie theater. It could be possible that Richard was drinking as a means to cope with the incessant stream of Instagram pictures and the overwhelming stench of Axe body spray. Damn you kids! How dare you do this to that nice man!

So what was Rich’s excuse for his behavior? Well Richard Madison quickly made bail and then claimed that he was, in fact, not guilty of these crimes. He then reported to My Fox, Chicago “You know, if I was guilty, I would still be in jail. That’s my thought. I would not be at home right now.” He claimed that the limo had an issue with the wheel alignment; which is why it was driving like a hot wheel car down a track constructed by a five year old.

According to this guy, posting bail equates to being completely innocent of any crimes. What a find! Somebody ought to go tell Tim Lambesis

This really could have turned tragic. This would have been a very different article if this guy had been so drunk that the limo careened off a cliff, exploding on impact. Instead, it would seem that this story is one that I find rather funny. Hopefully I don’t go to hell for laughing at the misfortunes of the drunk limo driver. Still, if you are going to get arrested for drunk driving. You might as well get arrested while driving a sick Hummer-limo.

The above images can be found here