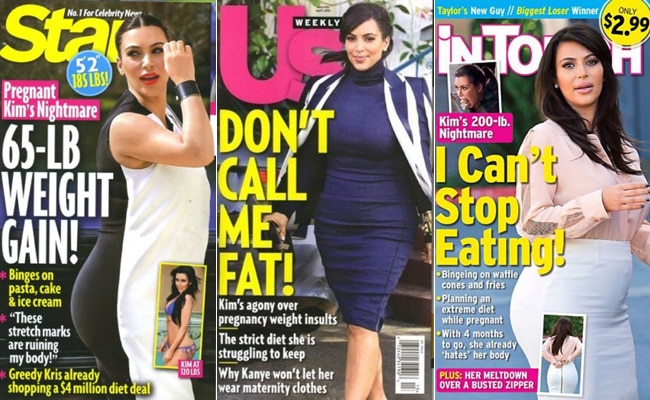 Kim Kardashian may or may not be fat, but that view depends on the person one who is telling it. Thus begins the lively discussion that has taken sway lately as claims of tabloid exaggerations that Kim Kardashian is indeed fat and more than what the reality media whore has been open to admitting to whilst family members brace to defend their sister.

Coming to their sister’s defense almost for a second time in as many days (which can only imply the sting is quite there for the taking) are Kim Kardashian’s younger sisters, Kendall and Kylie Jenner who have made it a cause to protect their sister.

Kendall added that all that matters is how Kim feels in herself. ‘If you like it, and you feel good…’ she began, before her sister interjected.

‘I’m like, “Are you dumb?”’ Kylie cut in, taking a slightly more angry approach.

Snapped 17 year old Kendall Jenner: ‘I don’t get it,’ and Kendall drummed the point home.

But not counting on her sisters, 32 year old Kim Kardashian who is expecting a baby with boyfriend Kayne West also took matters into her own hands in a blog entry she posted:

‘I saw some comments that the skirt is too tight for the pregnancy and that’s ridiculous!’ she wrote. ‘I bought this skirt a few sizes bigger and there is plenty of room.

‘For any concern that my clothes are too tight, I have so many pieces custom fit for my growing body!’

The famously curvy star added: ‘It’s funny because Kourtney warned me that when I get pregnant people’s opinions will be on an all time high and everyone will chime in! So I now see what she means.’

And yet that may be the first sign of capitulation as our media hero as she is suddenly held accountable to a standard that she in all reality has no chance in sustaining.

She is a woman who is pregnant and to cut to the chase has no real talents save for her uncanny ability to provoke wonder given her remarkable ability to seduce media pundits.

For once she is forced to deal with the fact that she may not necessarily play the hero or reality hero role that she has developed as she is forced to contend with the real world  inconvenience of her pregnancy which has forced her to take stock with a naturally ballooning figure that comes with the territory.

That said nature has little interest or time whether our media hero can play or look the role she has been designated for save for the role of providing sustenance for the life brewing inside her.

Which raises the awkward question how long can Kim Kardashian afford to sustain the illusion of  svelte photogenic media hero that she sold herself as and the demands of tabloid land that so vehemently insist on holding her to a standard that we all know she has no chance in sustaining….?