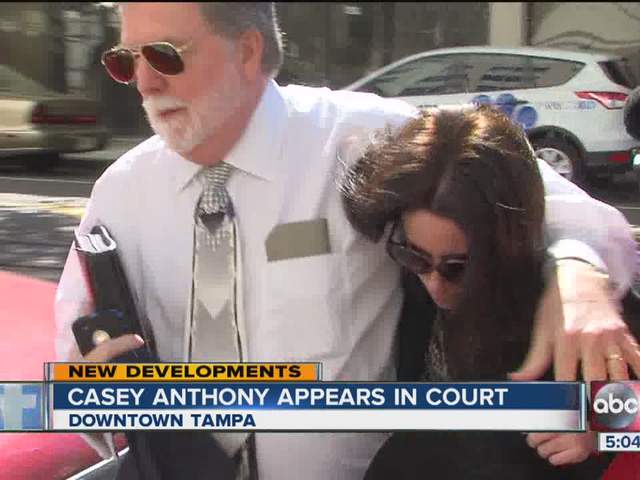 The visage of Casey Anthony today in Tampa, Florida as she headed out for her first public appearance since she left prison in July 2011 after being acquitted of the murder of her daughter, Caylee, predictably was a media spectacle.

As she appeared in court today in lieu of a bankruptcy hearing, Anthony who wears the unceremonious title of one of the most hated women in America went on to declare that she does not have a job, a car and lives with friends and relies on unsolicited gift cards and cash to get by.

Offered Anthony: “I guess you could say I’m living free off the kindness”

Dressed in a white short-sleeve top, a black skirt and black heels, she emerged from a sport utility vehicle and several dozen photographers and reporters swarmed her. When she left the courthouse, about 10 U.S. Homeland Security officers stood on the steps with guns.

During proceedings today Anthony went on to say all of the “unsolicited” money, gift cards and donations were sent to her attorneys, who then pass them along to her. She added that her criminal attorney, Jose Baez, has given her about $3,400 in cash “to help with my living expenses.”

Anthony also refused to disclose who pays for her cell phone, with one of her attorneys saying that it was due to “safety and security concerns.”

The hearing came as a result of Anthony filing for bankruptcy in January, claiming about $100o in assets and $792 000 in debts.

Unsurprisingly, only one creditor showed up at the hearing: R. Scott Shuker, who is a lawyer for Zenaida Fernandez-Gonzalez, who has gone on to argue that her reputation was smirched after Anthony in 2008 told investigators that it was a woman bearing her name who purportedly kidnapped her daughter Caylee.

Of contention was whether Anthony had been approached by a media entity for a possible sale in her side of her story for a movie or book deal.

Told the court, Scott Shuker: “From the smell test, it didn’t smell right. Any time you see an attorney in what’s supposed to be a no asset case being that active, more to the point, you had five attorneys there, allegedly none of them being paid, that’s odd.”

Shuker went on to say that his client suffers damages “to this day” because of her alleged link to the case.

At the time of Casey Anthony’s release she was expected to make millions off book deals, movies and TV shows after she was acquitted of Caylee’s murder in 2011, but the big-money contracts never materialized as the public at large stone walled any prospective media deal at large.

Interestingly in an interview with Piers Morgan in June 2012, Anthony went on to  reveal that she spends her time reading the Hunger Games books, watching vintage comedies and ‘is not 500 pounds,’ despite previous reports to the contrary.

She also denied that she has plans to move to Costa Rica when she’s legally allowed to leave Florida.

She denied killing her daughter to the CNN host, but said she was ‘ashamed’ of who she was.

At present it appears the public has hardly softened on their stance on the purported baby killer who continues to reflect on some level an undercurrent feeling of disconnect in society with what is right, just and equitable and ultimately who gets away with what.