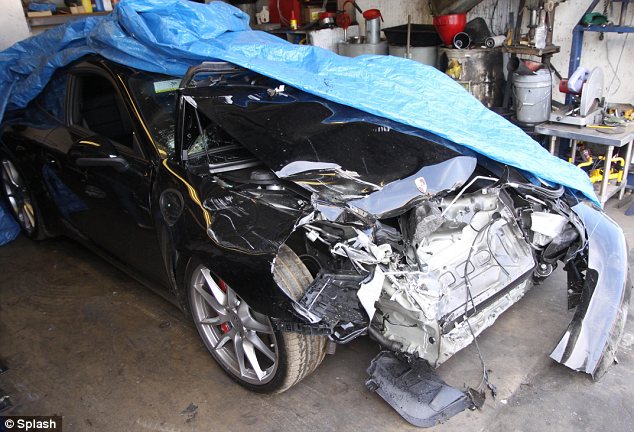 Seems like our collective hero has found herself boxed in a corner after the driver of the 18 wheeler that she ran into along the Pacific Coast Highway came out and told tmz that Lindsay Lohan’s people tried to bribe him to keep the incident under wraps.

According to Lilo,her story now goes something like this:

‘Lindsay is sticking with the “truck cut me off!!!” story, but with a twist, she claims she slammed on the brakes, but nothing.’

But nothing? Hmm. A brand new Porsche and the brakes suddenly give out? Well let’s give that the benefit of the doubt. But then again this is Lilo, our inferno of doom, metaphoric car wrecks, hapless engagement to a sordid world that refuses to ever cooperate with her.

Of course it’s never her fault. That would infer an unhappy ending, and nothing in Lilo’s life ends unhappily…

For her part, Lilo is also insisting that her hawt ass never offered James, the truck driver (who’s history of driving, sniffing, drinking and whoring and general nuisance factor is unknown unlike our hero’s) a bribe and that James is just another bixch trying like the rest of them to extort Lilo cause she’s famous.

Kids, should we order that trollop off the menu with an extra bottle of ketch up to help the taste?

Never mind Lilo, we still adore you, bribe or no bribe, faulty brakes or good brakes, extortion or no extortion, I still think you are the sweetest venomous thing that keeps me awake every night. And to think there was a couple of weeks in a row where we all thought you had gone back to perfect teacup manners.

Isn’t it time you also became a self conceited celebrity convinced of their own divinity and self righteousness? Unless of course you already are one….