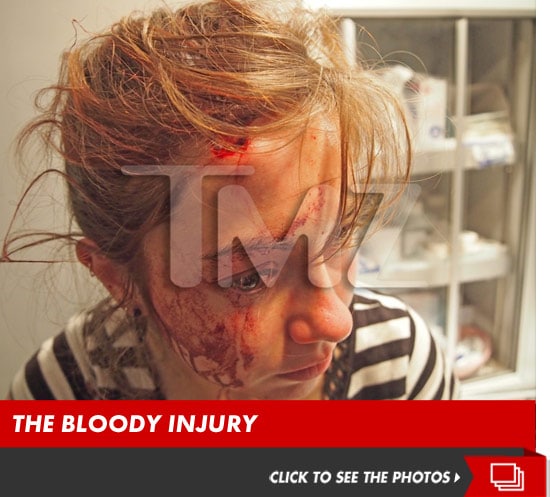 Video: Chris Brown and Drake go to blows over Rihanna.

One way or another Chris Brown will always make sure a woman somewhere will end up getting beat up….

Details are starting to emerge after last night’s cluster fuck which saw fellow rappers Chris Brown and Drake tear each other apart after perceived slights over hawt bixch Rihanna that an innocent bystander literally had her head smashed open courtesy of a thrown bottle.

tmz: TMZ spoke with Hollie C. — a 24-year-old Australian tourist who went to club W.i.P. Wednesday night with some friends.

Hollie tells us she was hanging out and having a good time when the brawl exploded between Brown’s entourage and Drake’s entourage.

Hollie tells us, “Within a few moments of noticing glass being thrown around, I saw a glass bottle headed towards me; consequently hitting me in the head.”

“I immediately started to bleed and proceeded to fall in and out of consciousness.”

Kids, sounds like this Aussie tourist has something wonderful and memorable to relate back to all her fellow Aussies when she finally makes it home in one piece. Then again how bad can a shot of vodka with your own blood really be?

And the drama proceeds:

Hollie says … in the midst of the chaos, she was transported to a local hospital by herself where she received 16 stitches to close up the bloody gash. She also received a tetanus shot.

Hollie was released from the hospital early this morning … and has since filed a police report … but tells us, “I had to take the subway home with no money or jacket. Nobody would even sit beside me. My friends were so scared because they did not know where I was.”

Chris Brown the world is not laughing with you today. Nor you either Drake…As for you Rihanna I hope you’re lacing your vodka with the good shit.

Isn’t it time you had a multimillionaire throw a bottle at your head too?