That said the huffington post made a very astute observation as to the veracity of the movement as it once again seeks to regain a foothold:

huffpo: Over the winter and spring, as Occupy Wall Street largely faded from the headlines, activists in the movement kept busy meeting with members of community groups and other pillars of the traditional left. The ties that have been forged between these two distinct outgrowths of the left signal what many describe as a broad change in the Occupy movement. “We recognized that people have been working for the same changes for centuries,” said McGuinness. “And it’s obvious that we need to listen to them and take a step back from being the only voice for progressive causes.”

Which perhaps raises the most important question, will the movement with new concerted alliances (and the hindrances that so often come with negative public perception of ‘liberal causes’ courtesy of an entrenched media resolute in debilitating such outlets) be able to make an actual leeway into addressing the social inequities it seeks to address?

Which is to say, no one cares anymore – assuming anyone ever did.

OK, some did: Besides the usual suspects – anarchists, anti-capitalists and misfits – the “movement” had lots of support in the mainstream media. Attempts to picket and disrupt local corporate headquarters essentially fizzled.

The closest thing to an actual disruption that was evident was a few bags of initially suspicious white powder – corn starch, it turned out – mailed to several banks. It all made for good video, but little else.

Fact is, the vast majority of New Yorkers – the real 99 percent, in other words – spent their day doing precisely what OWS had promised, and failed, to stop them from doing: They went to work and school.

Which is as good a response to May Day as we can think of.

The American Thinker on the other hand has pretty much raised its arms and declared the movement’s attempts to re enter the fray as essentially a spent one:

Violence in several cities, promised tens of thousands who would take to the streets and revitalize the OWS movement not in evidence anywhere, a general stike that was a joke from the beginning and that 99.9% of the 99% ignored, and a liberal press that barely noted the events.

On the count of three, everyone point their finger at the left and laugh. And then thank them for giving us a front row seat to see the end of Occupy Wall Street.

But perhaps one of the most pithy comments this author was able to come up which perhaps expresses tacitly what has transpired for the American dream comes as follows:

In america, no one aspires to be part of the proletariate, everyone wants to be the bourgeiosie………but what we have is a liquidity problem too few people hoard all the money…..dams have been built in the hopes of trickle down………perhaps the time is coming to break the dams.

Which is to say, by now it is openly understood that it is every citizen’s right/fairy tale to become well off, well endowed and living off the fat of the land but what is not publicly courted is the fact that most of the fat off the land has been long cordoned off and marked the preferred payola of entrenched interests whose job it is to ensure that only those who belong in the club and pay their dues are accorded the dividends.

Then again should we as a society be surprised at this behavior as it once again champions the individual, the victor, the glamorous and our collective stampede to become that too when the reality of the situation, and current economic dialectics suggest that only certain players in the barn can only be assured of certain niceties that at one stage before social tampering and ‘deregulation’ took place was the trumpeted payoff for playing along with the system? A system it seems that has metaphorically seen the goal posts moved mid match in the death of night…

Who knows perhaps at the end of the day, most people who may have have cared will have been put off by the reality that ‘reality can be a pretty crooked and bleak one,’ or to put it another way, as long they’re somehow managing to eke out their ‘version of sunshine’ there really isn’t too much pay off to make too much noise. 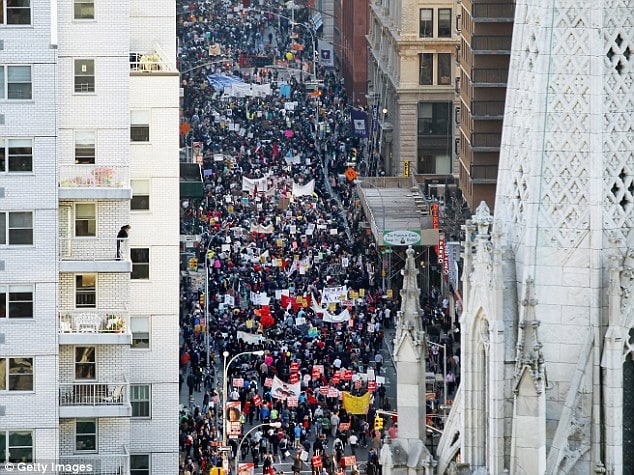 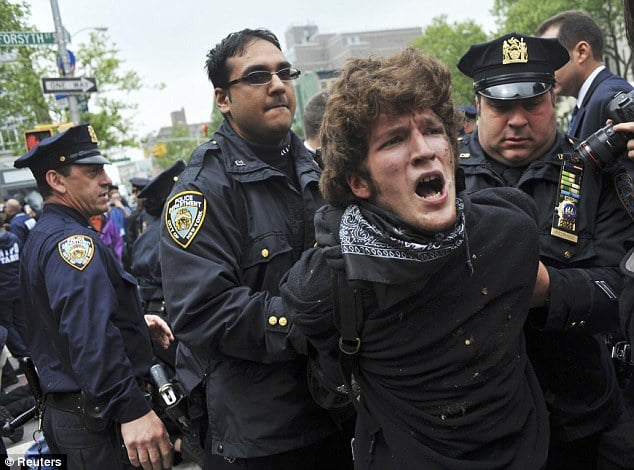 ‘SORRY FOR THE INCONVENIENCE, WE ARE TRYING TO CHANGE THE WORLD.’- HOW THAT STATEMENT CAUSED A FRACAS ON FACEBOOK…

CITIBANK WOULD LIKE TO BLAME THE NYPD FOR HAVING 23 OF THEIR ‘CUSTOMERS’ ARRESTED FOR TRYING TO CLOSE THEIR ACCOUNTS.

GOLDMAN SACHS EMPLOYEES ARE NOW BEING ORDERED TO STAY AWAY FROM OCCUPY WALL ST.

Occupation Wall St: Week 4. What they don’t want you to find out…

Finally America begins to revolt against the moneyed classes. But will the rebellion actually lead to any changes?

So you say you want a Revolution