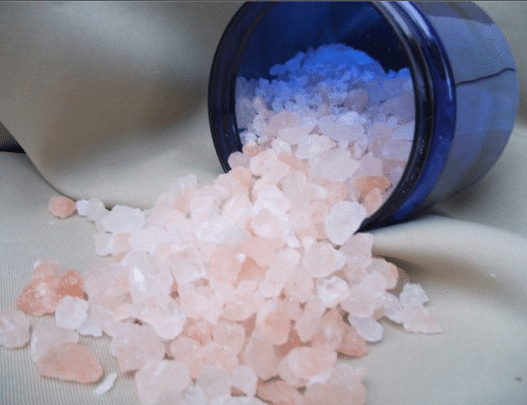 Shooting up bathing salts: Not only are people snorting bathing salts they are now starting to inject it too with disastrous consequences.

It’s only been a recent phenomena but the use of bathing salts as a recreational drug has begun to take off. Said to pack as much punch as cocaine or methamphetamines and leaving most users craving for more the active ingredients, mephedrone and methylenedioxypyrovalerone, also known as MDPV have begun to inflict users with some very dangerous consequences.

One example in point is the story making headlines today involving one young woman who was forced to have her arm, shoulder and breasts amputated as a result of developing a flesh eating infection (does this remind anyone of krokodil, the street dope concoction emanating out of Russia?) after injecting herself with bathing salts.

At first diagnosed with a skin infection the woman was treated with antibiotics, but with lingering pain in the arm she returned to the doctors who upon re diagnosing her realized that she had contracted a life threatening condition called ‘necrotizing fascilitis‘ which necessitated immediate removal of tissue ass the infection if allowed to spread further would eat her whole flesh off.

Bath salts which resemble ordinary scented bath salts are man made stimulant drugs that can still be found in various outlets being sold over the counter under such names as Aura, Ivory Wave and Vanilla Sky and retail for $15-20. The bathing salts are currently banned in the UK although available in certain states within the US and online in the US.

“Despite the drug’s legal status, it must be treated as illicit, and one must be suspicious when examining a patient with this clinical history because the diagnosis of flesh-eating bacteria can masquerade as abscesses and cellulitis,” says Dr. Russell R. Russo a third-year Orthopaedic Surgery resident at LSU Health Sciences Center New Orleans School of Medicine who treated the 34 year old woman.

Which is to say if the consequences of even just snorting it can be quite severe never mind the extra heightened rush of injecting it.

So much for recreation…