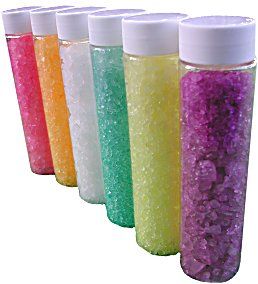 Mostly teens and junkies looking for a cheap trip have been reportedly (and here’s the big media tag line) “snorting, injecting or smoking” bath salts which cause “hallucinations, paranoia, rapid heart rates and suicidal thoughts.” The salts, allegedly as powerful as methamphetamines, have already been banned by emergency order in Louisiana. Which goes to show the old proverb: If you build it they, quite apparently, will snort it.

The active ingredients, the stimulants mephedrone and methylenedioxypyrovalerone (MDPV), had been previously unregulated because they aren’t marketed, or likely intended, for human consumption. Especially considering that, according to all firsthand accounts so far being reported (or perhaps cherrypicked) by most major outlets, the trip is nothing short of terrifying.

Here’s the most tragic one, taken from MSNBC’s report: “Dr. Richard Sanders, a general practitioner working in Covington, La., said his son, Dickie, snorted some of the chemicals and endured three days of intermittent delirium. Dickie Sanders missed major arteries when he cut his throat. As he continued to have visions, his physician father tried to calm him. But the elder Sanders said that as he slept, his son went into another room and shot himself.”

Said Dr. Mark Ryan, director of Louisiana’s poison control center, “[MPDV] causes intense cravings for it. They’ll binge on it three or four days before they show up in an ER. Even though it’s a horrible trip, they want to do it again and again.” The center had fielded 125 calls in three months, after creative use of the salts first started trending last Fall.

A more generous, and likely more accurate, outline of the drug’s effects can be gained from a quick scan of the report headlines at the MPDV Erowid Experience Vault:

“Wickedly Addictive and Quite Fascinating.” “Stimulated, Alert, Socially Loose.” “An Adventure in Euphoria and Tachycardia.” “Terrible Stuff,” “A Fusion of MDMA and Crack,” and “Not Exactly a Good Time.”

Also not exactly anything new – but now the media’s been turned on to it, which means you may only be able to ride the ‘White Lightning,’ should you be so inclined, for at best a limited time.

But before loading your nostrils with the stuff, keep what one intrepid Erowid reporter said in mind: “Doing/coming off of MDPV is like winning a Mercedes and being told at the last minute they got your name wrong. Uggh.” And if that weren’t enough to dissuade you, another user reported four hours of essay writing, “two whole hours of finger tapping,” and super-intense high Facebooking. ‘Uggh,’ is right.