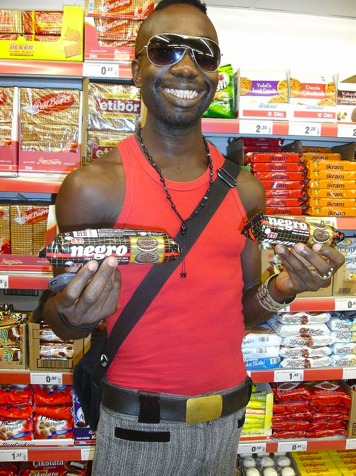 “I thought you were older than that”, I shouted to him over the water. “You look much older than twenty!”

“You look much younger than you are, Aziz shouted back.

“Well, when I was your age, I looked about twelve, so it is only fair, I suppose”, I said. “And as we say in America, black don’t crack unless you smoke it!” As I began to laugh at my own joke, I heard Aziz come into the bathroom as naked as the day he was born, which was not that long ago.

“Do you mind if I shower with you?”, Aziz asked.

“I think it’s a little late to be asking me that as you are completely naked and under the shower with me now!”, I answered. I tried to sound as if I was upset that he was standing before me stark (and dark) naked, but I could not even say it with a straight face.

As if anyone in their right minds would kick this out of their shower stall!

“Don’t be shy”, Aziz said to me as he stood in front of me and began to lather up. As he did so, I did a quick visual survey.

Yes. There was definitely something in the milk that these kids were drinking these days!

“If I were shy do you think I would have brought you to my hotel room after knowing you for less than four hours?”

Aziz laughed and turned around under the shower head. Now it was his turn to take all of me in. He looked me up and down and then turned back around.

“What is that supposed to mean?”, I asked him, although I knew good and goddamn well exactly what he meant. That’s when I was reminded of what one of my good friends had to say about French men.

“French men are all hung, but they are all bottoms.” This is the gospel according to Kevington, who is the go-to heaux when it came to all things French.

Well, not all things, but I digress.

After a show that cleansed away the sins of earlier in the night, we were now prepared for fresh fuckery. Back in my bed, we both got under the cover, I lit a candle and proceeded to talk.

Taking my lead, Aziz finally got with the program and no more words were spoken. It was all body language from that point on. Eventually, Aziz was asking me if I had condoms.

Of course I had condoms. I had other accessories as well, if it came to that.

And just when I thought I was about to pop black, Aziz huffed and he puffed, but he could not take it. A bit deflated after my repeated efforts to get into the Louvre groove, I began to question his French-ness. A true Frenchman would never give up without a fight! A true Frenchman could always bend it like Beckham! But alas, I was willing to concede this. Hell, the next time I had a black man in my bed, Hillary would probably be President!

By the time the sun had begun to rise on the first day of the new year of the last year of the world, Aziz had fallen asleep naked in my arms and I’d made good on my promise to bring in the new year with a bang.

Heaux Confessionals; “Have you ever been with a black man before?”

Heaux Confessionals: How I broke my last male lover in…

13-year-old Manhattan boy falls 20 stories to his death (while doing...