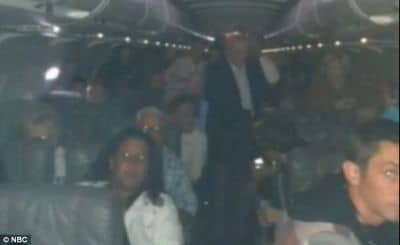 Up to 200 passengers on an aborted JetBlue flight were subjected to hell this weekend after their flight was grounded for 7 hours with no food, water or working bathroom facilities, hardly the pleasant flying experience JetBlue regularly touts. Now authorities are trying to figure out why passengers were subjected to such trauma and why it eventually took a paraplegic flier complaining of circulation in their legs before being let out of the plane courtesy of police and firefighters storming the plane.

It all began after the flight was caught in a sudden snowstorm that suddenly hit the Northeast forcing the plane that had taken off from Ft Lauderdale a few hours earlier to detour to Bradley International Airport in Connecticut instead of its intended destination of Newark International airport in Newark, NJ.

Exacerbating the frustration off passengers was the fact that the plane kept circling Newark airport awaiting permission to land only to then scare the living bejesus out of passengers when the captain then announced that the plane now only had half an hours worth of fuel left and that it was now going to be forced to land at Bradley International Airport, CT, a mere one hour away. For those with any concept of math this could only mean certain death….

The plane however did manage to land at Bradley International Airport (the captain by this stage had announced that there was indeed enough fuel to hightail it to Bradley) and where most passengers would have exhaled a large sigh of relief, a new round of terror was now awaiting unsuspecting passengers. That of being trapped on the tarmac for the next 7 hours with hardly a logical explanation from the captain as to what the delay was.

Hardly the benign flying experiences one expects on a routine domestic flight- but then again what counts for routine or normal these days given the maddening inspections courtesy of TSA before taking off and the increasingly maniacal passengers that sometimes make flying the cringe experience many of us are now beginning to loathe. To the roster of madness we can now add the bizarre tactics and behavior of online jet crew.

As passengers awaited to exit the plane, the captain refused to issue the disembark signal forcing many passengers to wonder what the problem now was. According to a statement later issued by Jetblue the airline blamed the timing issue on an ‘unusual combination of weather and infrastructure issues.’

One can only wonder what the airline means by infrastructure issues, but perhaps on some level perhaps we ought not dare for fear of coming to the realization that the airline was completely inept and ill prepared to handle something as mundane and common as a snow storm. But then again what should we expect when the airlines and airports go out-of-the-way to shortcut expenditures given their demand for deregulation which has freed them up to not to have to offer a higher grade of services and precautions had normal rules remained in effect.

The plane now faces a fine of up to $27, 500 per passenger if it is decided that it exceeded the tarmac delay rule. The law currently states that after 3 hours on the tarmac the airline is legally obliged to release the passengers. But that was easier said or imagined then what was then to follow.

Exacerbating conditions was that other flights were now being diverted to Bradley Cooper and that International flights were being given preference and the fact that there was only tow bar in operation which could serve to bring planes off the tarmac (something which hardly makes sense given the preponderance for the airport to be used as a back-up airport of last resort in the region which services 3 international airports within 30 minutes of each other).

Along with rolling power outages the airport was now experiencing it seemed passengers on JetBlue flight 504 were left in a Beckett like no man’s land. After having touched down at 1.30 pm (and having taken off at 7am earlier that day) passengers by 6pm had still not been released from the plane, forcing some passengers to loudly bemoan the situation to crew and a few of them to even call 911, with reports that one female passenger had just experienced a nervous breakdown.

After repeatedly been told that passengers would be left off the plane the captain would each time recant his offer, courtesy of the airport’s inability to tend to the situation at hand. Ultimately it took state troopers storming the plane to get the passengers off the plane which forces the larger question why did it have to come to this? Where had the airline lapsed, the airport lapsed and why is that passengers are increasingly being exposed to humiliating flying experiences? Is this what we mean by safer and pleasant flying experiences post 9-11 or is this just what you get when you deregulate the airline industry and give the airlines permission to cut corners and bulk on profits at the expense of passengers? So much for having a pleasant flight…