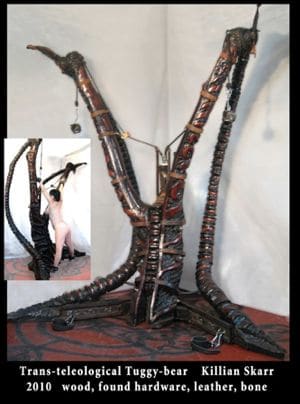 We snake our way through the filthy piles to a door which has just enough of a clearing to open. “Do not enter” has been scrawled upon it, next to a ridiculously grinning, red devil-head. It’s dark and musty inside the room but movement is heard, a rattling as if something is moving in a cage. Instinctively you pause in your breath, your body tenses, fight or flight. Suddenly light floods the room and you are face to face with a young woman, perhaps early 20’s, naked except for the choke-chain around her neck and the scars, bruises and tattoos that adorn her flesh, staring up in enraptured obedience from a dog cage on the filthy floor. You can hear your own heart beating in your chest as Killian Skarr’s piercing eyes assess your reaction. You remind yourself again that this is definitely not your average artist. Bob Ross, he is not.

There is insufficient room for him and his captured little pet to easily walk past you so he suggests that you lead the way this time; a suggestion that simultaneously fills you with relief to be leaving the basement, but trepidation at having this man, who is now leading the woman by her collar, at your back. You hope that your heart isn’t beating so loudly that he can hear it as you pick your way through the clutter and finally ascend the staircase. You’re unsure what effect your fear may have on him. And you’re becoming increasingly careful not to provoke any of the madness that is everywhere in evidence.

Back in the gallery, or museum of torture devices, he immediately begins to bind the docile woman to his various devices; all the while shifting between a matter-of-fact explanation of the mechanics of each piece and a fantastical explanation of its historical use. Needless to say these pieces are not based upon any historical artifact, they are far too insane in their form and construction to be anything other than novel invention, but he persists in telling you these absurd tales and he delights at your unease upon hearing such blatantly false facts.

If you ask him directly if what he says is fact or fiction, he replies “All artists are charlatans, you know? They are always trying to convince others that their lies are reality,” and he catches you with that mischievous glint. 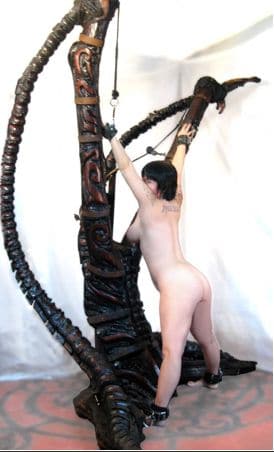 Mercifully he only binds and unbinds the woman to his sculptures rather than actually subjecting her to torture, right before your eyes, in this confined space. From the looks of her ass though, he is not usually so forgiving. He places the woman in each sculpture and continues his banter almost as if he were demonstrating appliances. It’s not until he arrives at the last piece, his latest, that things get very uncomfortable; for yourself and for the young woman.

“This is called the Post-solipsistical Smoochy-pie”, Killian Skarr informs you proudly, a title whose absurdity at first belies it’s significance. It is a massive sculpture. Wood and metal seem to flow together and spiral or arch out into stinging tentacles, curving spines and rapacious horns. Near the ceiling it almost seems to undulate as if it were swimming, or flying, or descending upon its prey. And as your eyes automatically follow the central curve down to the floor and up again you realize that it terminates in a very large wooden phallus; itself decorated with carved spirals and sharp spines. 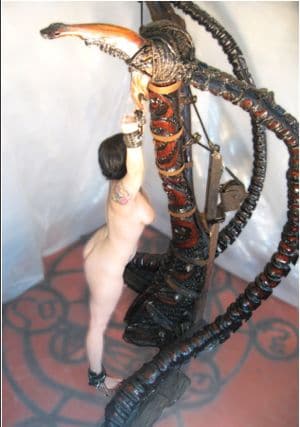