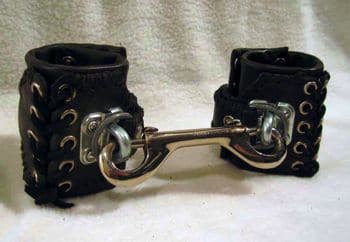 There, directly before you, this woman works into a rhythm that causes first her face to come dangerously close to being skewered, and then as she sinks down an outsized dildo is caused to be thrust up inside of her. It would be easy to dismiss the whole display as pornographic, if it were not for the mesmerizing, frightening beauty of the sculptures form and the ingenuity of the mechanisms action. The artist takes particular delight in informing you of the aptness of the sculpture’s name at this point. “See how it’s trying to give her a big smooch? And how she fucks herself? Just like a good little solipsist…”

The demonstration ends and Killian Skarr puts his pet away. This time he doesn’t ask you into the basement and so you are left to confront the ambivalence of his twisted creations. On the one hand they are grotesque and frightening, repellent not only for their aesthetic but by their very nature as devices of torture. And at the same time they are strangely beautiful and undeniably mesmerizing. Your eyes trace again and again the twisting spirals and the graceful arches and once again your mind is caught up in picturing how such a form, organic in its own right, compliments so exquisitely the human bodies that are bound to it. It’s disconcerting to simultaneously find something so disturbing, and yet so compelling.

This same ambivalence extends to the artist. Killian Skarr is amicable enough. He is impeccably polite and has a disarming, self-deprecating sense of humor. In some ways he might even be considered charismatic. Certainly the women who are in his thrall would agree to as much. But they will also be the first to tell you that he is absolutely insane, and probably never more so than when he is working on a sculpture.

“He’s definitely unstable and prone to deep depressions, but I think that helps him create art. He seems to mine the darkness and his own lust for what he creates. He’s a genius. He’s also great in bed!” said a squeaky, adorable young woman with tattooed cleavage and pink pigtails who goes by ‘Pixiedoll’ on the livejournal that she keeps to document his art.

Regarding his mental illness Killian said, “The whole process of art for me is the constant struggle to forcibly shift my bipolar brain into a manic-phase. It’s the only method I have.”

This method, according to his portfolio, involves “heightened states of awareness brought about through clinical mania and intoxicants [in which] he wields a chainsaw, a blowtorch and a myriad of other power tools in a frenzy of mad invention.”

His bizarre take on the process of making art seems to involve as much self-destruction as creation. It is these very methods that have led to his arrest on three separate occasions. Once for stealing materials; he claims to work only with stolen tools and materials whenever possible, as if it were a point of pride; once for “demonstrating” a sculpture live at an arts and crafts show in a predominantly Mennonite community. And the most recent arrest came while filming a performance piece inside a self-storage unit. 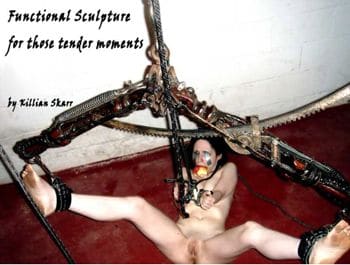 A neighbor called police in the early morning hours this past Labor day to report “blood-curdling” screams originating from the storage building. One can only imagine the reaction from police when they lifted the door. Killian complains that they have yet to return his camera and film, but it is a wonder that he wasn’t imprisoned permanently, or shot. If one thing is true about this unhinged, troubled man, it is that he inhabits an entirely different perspective, completely different from the rest of mankind–  and that he shows it to the world through his art.

To see more of Killian’s work go to his website: killianskarr.com

When asked if he uses his art as an escape he had this to say, “Art is not an escape. There is no escape for me. I am constantly, painfully aware of the horrors of existence. Making art is a furious, desperate process. I cling to it like a weapon.”