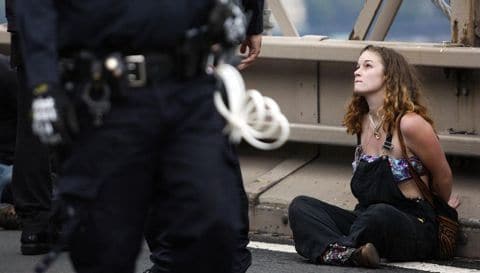 mission to feature individuals piqued by the protesters and to portray them as disturbers of the peace goes some length to expose the media’s culpability in once again failing to examine what’s really at stake but why perhaps the protests are inherently futile and ill advised in the first place.

In a society that asserts the documenting of concerns of the wider collective, the mere fact that certain concerns are downtrodden and ridiculed should on some level underscore the severity the movement has had on the media and its desire for the time being to heed their demands.

If the media did an awful job of examining the motives of why President Bush and his successor, Mr Obama invaded Iraq and Afghanistan and have insisted on staying there (never mind the fact that now most media entities now admit they were duped) it appears it has not been willing to learn previous lessons and instead stayed true to those interests that keep them afloat. If the words parasitic come into mind- you wouldn’t be too far off the mark…but perhaps that’s a discussion best left to Wikileaks chief Julian Assange.

For the time being most mainstream media outlets are adamant to sully the protests and to wonder in mock tone as to what brings them together and to portray the protesters as ‘spoiled privileged louts‘ who are inconveniencing greater society. Never mind the greater inconvenience manifested at the hands of the mainstream media which has succeeded in side stepping issues and addressing what ails the greater public- Snookie getting laid hardly merits such a discussion, no matter how ridiculous and wonderful such made for decoy TV characters are…

Then we had the news that over the weekend JP Morgan Chase made a sudden gift to the NYPD to the tunes of $4.6 million. Which depending on whom you ask is equatable to grafting. Perhaps we should casually wonder if Chase also turned around and ‘donated’ the movement down the street any loose change either? Of course you all know the answer to that…which on some level should announce how (and rightfully) concerned the powered elite are as the protests gain momentum beyond disaffected, ‘spoiled’ youths to that of the working classes who are beginning to take notice. 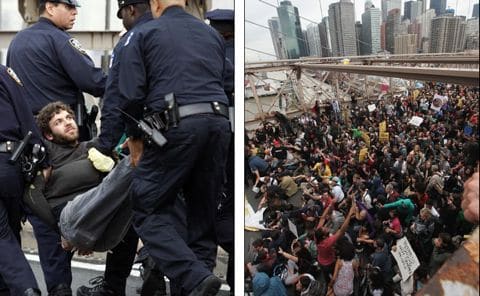 The news of over 700 arrests over the Brooklyn Bridge alone this weekend (which according to who’s point of view you take- amounts to willful entrapment by the NYPD- but let’s not forget that large donation kids….) should also underscore the degree of unease being felt by the big brass.

Ultimately what this all comes down to is will these protests lead to any reliable changes and can the system which is invariably corrupt and bought of by the moneyed class (it should not surprise anyone that both the Democrats and Republicans are the recipients of vast cash disbursements courtesy of the top one percent) result in a type of appeasement that will placate the day by day growing protesters? Of course what’s interesting to note to date is the government’s abstinence from the fracas at hand…one wonders why?

If the 90’s and the early 2000’s were the decades of deregulation (at whose behest and opportunity?) then perhaps what we as a society might want to ask is are there situations where we can demand that certain regulations and watch guards are once again imposed? Imposed so as to help exact debate and a watchful eye of those interests who risk cornering the market (as has been the case in banking, insurance, finance,media) and capitulating the quality and the integrity of those services and hoarding the interests of a few elite (never mind we were all promised more competition and freedom, but who’s freedom?).

Once again it’s an issue that will come down to lobbying and as long as lobbying and cash for campaigning is the relevant way of politics should it then surprise us if any real changes are made? Which in all implies that a separation of the duties of government and that of the economics of government ought to be contemplated so as to help make decision making less partial and liable to what essentially amounts to a greasing of the wheels or in layman’s terms- bribing.

Another question that ought to be raised, is if we are to separate the clingy relationship between business and politics and that of