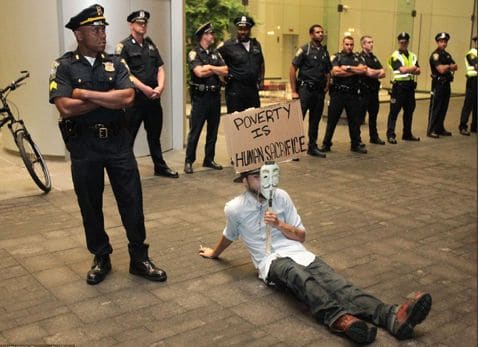 big business itself could this be done by the introduction of more competition, more voices, players within the system? Perhaps giving attention to other third, fourth political bodies might be a start- but as long as attaining political power is a function of political campaigning (which ensures a 2 party system absurdly representing the vast interests of 300 million people plus) then perhaps what the protest ought to be taking focus on is the act of political campaigning.

After all it’s important to note disparities in the system but it is also important to address how we as a society can agree to bring about changes to those things that grieve us and perhaps the mainstream media is right in this one respect- at the moment, no concrete plan or idea has been fostered as to how to exact changes in a very one sided system, and certainly waiting for the powers that be to come up with some watered down ideas hardly constitutes for much change, but then again at least the act of creating dissent and bringing awareness to what ails greater society is a good sign.

Perhaps what then is needed next is a constituency of those individuals who work within media, medicine, insurance, education,finance and politics to propose ideas that will go some way in addressing the legitimate grievances of society-and to bring back some checking of the system and evening of the playing field. To after all ignore the growing protest movement and hope that it will peter away is like putting one’s head in the sand- hopefully we can begin to see a meeting of the minds or at some stage the powers that be might just see themselves tossed very far out to sea… stranger and worse things have happened, just look back at history….

So you say you want a Revolution…