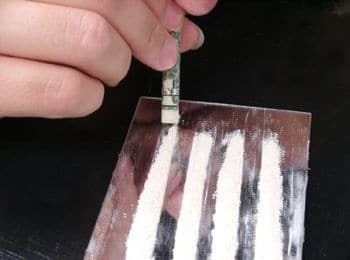 How’s this for irony. With protesters in recent weeks being assaulted and treated heavily handed by authorities, one coke dealer enterprising young man found himself on the wrong side of the law after assaulting protesters in his attempt to sell baggies of coke. The best part is that the protesters themselves intervened to get the police’s attention to ensure the young man’s arrest.

gothamist: Cops arrested 19-year-old Brooklyn resident Garfield Leslie last night, and charged him with felony assault, misdemeanor assault and drug possession. Witnesses say that Garfield was wandering around the park around 8 p.m. trying to sell small baggies of coke to people in different tents. According to the Post, Leslie punched a woman several times, then fought with a man who intervened. When another woman tried to stop the fighting, Leslie allegedly hit her so hard in the chest she fell to the ground and injured her wrist.

Now that’s what you call a hard sale. With reports that drug abuse is allegedly rampant at Zuccotti Park, who could blame the young man in trying to extrapolate a bit of extra juice for his own coffers? In case you think Garfield Leslie is a novice at the game (after all you really have to be doing something wrong to have would be customers want to call the police on you) think again:

Leslie was arrested four other times this summer, most of which were for coke-related offenses: one time for selling narcotics on a platform inside the West 4th Street subway station; another time he cursed out a police officer who then found marijuana pipes and 38 baggies of cocaine on him; Four day later, he was handcuffed again after cops found him allegedly passed out on milk crates in Union Square; and cops found more coke on him when he was busted for illegally passing between subway cars.

Kids, let’s be honest Leslie is probably sucking in what looks like white grains at the local penitentiary cause his nostrils don’t know how to get through the day without a sliver of the good stuff. But then again Leslie has got to figure a quick sure fire way to pay for his college education, but then again I’m going to take a guess here, if Leslie, our collective teenage drug lord is in and out of jail in as much time as it takes to slice up another eightball and start looking for hooker’s numbers at midnight, me thinks daddy has got a wad of money earmarked on 3 rotating lawyers that magically appear everytime Leslie crosses the ‘do not go to hell’ line.

Never mind it’ll only be another 28 minutes before Leslie is out and about hitting his beat and providing his valuable ritual of getting you your daily fix. Such are the problematic obstacles of budding cocaine dealers.

The Unconventional lifestyle of a Cocaine dealer. Part 1

The Unconventional Lifestyle of a Cocaine Dealer. Part 2